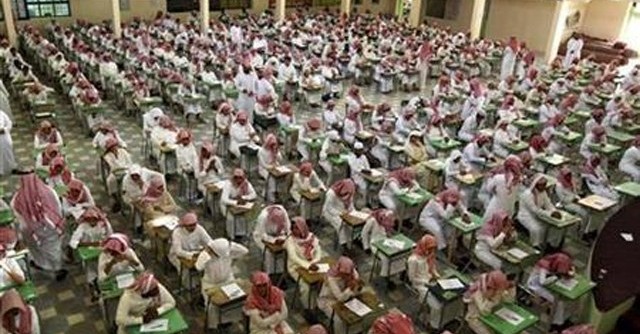 It is far from a state guarded secret that Gulf schools and colleges are not functioning up to expectations. In their test based system of Education, tests count for 70 to 80 percent of the grade. These tests are also book based and are often replicas of progress exercises found within the book Arab teachers and administrators alike refer to as ‘the curriculum’.

Despite it being universally known that using a paper test as a primary measure of achievement has been discredited in the west since the 1970’s, many Arab countries stubbornly continue to adhere to the practice. Because low test scores are attributed to poor teacher performance, instructors generally teach to the test and provide answers (if and when necessary) to show spectacular student achievement or be replace by a teacher who will. This has created an Education culture of rote learning and is said to be a carry-over practice of the religious schools which involved the accurate memorization of religious text.

As a result,  many Gulf schools and university simply don’t educate because standards and competencies cannot be addressed through a test based student achievement system. The only thing that can be truly measured through paper testing is the ability to take a paper test. Though this Education methodology may have been in vogue in the American Education system fifty years ago, the best western schools now have evolved into a more constructivist approach to teaching language and Liberal Arts.

Demonstration of knowledge through application is generally ignored outside SLA role play scenarios in Gulf classrooms—which traditionally are only value 3 to 5 percent of the grade at some so called ‘progressive’ university programs (seemingly due to the presence of smartboards and power point presentations) that denote themselves as using a student centered approach.

As a result, there are thousands—if not tens of thousands of Arabs walking around with degrees with only the know-how to pass the book based test they studied from. Unfortunately programs like Saudization are currently failing because passing a test doesn’t insure you are prepared for the work force—particularly on the level of the kingdom’s industrial and commercial global aspirations.

To further impede their own progress, Gulf Arab Education culture has developed a popular belief among their student populations that ‘helping each other’ (called “cheating” in most places in the world)  during any sort of assessment is an accepted tribal etiquette and though officially frown upon, in many situations; in many places, is rarely punished. Besides what this does to any work ethic the system is suppose to espouse, these practices play into the nepotistic tendencies of most Gulf societies.

Technical Vocational Training Corporation (TVTC) Jeddah Campus and English Gate Academy (EGA)—Interlink’s (a US-Boston based Education management company) Arab partner in Saudi Arabia, have put forth a proposal to change how Education is done in Saudi Arabia. For the last two years close to twenty highly qualified native English speakers have be given card blanche by TVTC to change the way English language teaching is done. Teachers rather than being forced to follow a course book have been given the freedom to develop a curriculum from a variety sources to teach a set of standards and competency based standards that are centered on current student needs and challenges.

Interlink needs based curriculum, unlike most book based learning programs in the Gulf, is a truly student centered approach to class room instruction because it teaches each student according to his intellectual challenges rather than a standardized curriculum template made popular by ESL book publishers. The curriculum and learning style approach are organically put together by the instructor utilizing his Education, experiences and resources. The Interlink learning philosophy views that ‘test taking’ merely measure the ability to take a test, not knowledge the test is suppose to measure. By developing this methodology of learning, America has not only been first in contributions to linguistic theory and language acquisition, but a torch bearer of cross –curriculum teaching and expeditionary learning and training—the foundation of any skills training methodology.

Unlike the test based curriculum commonly used in the Gulf, Interlink uses portfolios as it primary means to administer authentic assessment. Students’ portfolios are used as a history of where the student was and how he has improved during length of the course. This means that pacing no longer becomes an issue because student learning is always measure against what the student must learn and what he knew before learning it. To pass, students must demonstrate mastery of his language skills in the context which he has learned them as opposed to learning how perform on a paper test.

Tests are used as diagnostic tools rather than as a formal indicator of student learning. The portfolio consist of task based projects designed to give the competencies taught context and make instruction engaging for the students as well as quizzes; homework and other work the instructor considers relevant to assessing and demonstrating student progress and mastery.

Though Saudi schools boast having this type of assessment (as an example of being student-centered), the weight they give it is usually a mere 18 to 20% which is regimented by rubrics that mirror ‘the book’ unit reviews and quantitative exams derived from them. This means, students may be required to do project work, but forgoing it and any meaningful class work, can still them a better than passing mark for just writing the exams alone. Interlink student portfolios are a whopping sixty percent of the student’s total course grade. Tests are only given a value of 15 percent. Even if a student passes every test under the Interlink assessment framework, competency must be proven through hands on’ staged projects as well as related class work and assignments that are closely monitored by the instructor.

Role of the Teacher

The program casts teachers as educators and role models for western work ethics and business personality demeanor. This is done  through establishing a mentor-facilitator relationship with their students within the school setting.  The teacher in the Interlink system guides and facilitates for learning and exploration. The teacher’s true task is to direct student interest through teaching self- learning and development.Interlink believes that instead of seeing the teacher as the one that implements book lessons, the role of the teacher is to use ‘the book’ and the resources at his disposal as tools to accomplish learning goals and objectives.

In addition, because the instructor is no longer required to pace course material, he is now free to consider his students learning style and vary material and approach according to mood of the class and unexpected environmental factors. Learning should be an engaging, motivating and relevant experience rather than a force march through a linear point of view of what some book says. The teacher in the Interlink system guides and facilitates for learning and exploration.

The teacher’s true task is to direct student interest through teaching self- learning and development. If Gulf students want to achieve like their western counterparts, they must be educated rather than trained.It is believed that only in this way, Arab students and future professionals will be able to stand among and perhaps exceed the western brain trust.

Like most western and Arab educationalists in the kingdom who have heard about the TVTC program, I was particularly elated to find such a visionary program in coordination with an American concern such as Interlink has managed to collaborate for a reform initiative in Saudi. This revolutionary project may be ‘the tipping point’ for the change necessary to eventually develop Saudi’s own Education and training resources and programs.

Competition on the Rise

There has always been a great deal of competition between western Educational management entities for a piece of lucrative government contracts. Lately, private universities within the kingdom have attempted to form language academies and preparatory year management teams in an apparent effort to compete with western Education providers and their partners. Though they offer nothing new to what has proven to be ineffectual on the Saudi training/Education methodological landscape, their main argument to snare contracts is that they can do the same (‘old same old’) for less.

Schools and colleges which are misguided enough to accept their offer, usually find out within three years that the only thing which has changed is whose name is on the checks. Usually in the Gulf Arab Education ‘business’ (and the unscrupulous western companies that emulated and partner with them) in the short and long run historical, consider making money more important than contributing to perfecting the Education infrastructure of their own country.

Insiders at Interlink tell me that various Arab agents have been covertly questioning program students about the effectiveness of the program’s methodology and filing unfavorable reports to TVTC administrators as prelude to their pitch to replace the program. Thought this has increased administrative scrutiny of Interlink personnel in Jeddah, Umair Mohammad, an Interlink site administrator feels confident there is no real danger due to the programs impressive results.

“They’re too late. The company has already been contracted with numerous campuses for the coming year. I think the government is tired of being bamboozled by these carpetbaggers. They’re looking for something that really works”, he said.