One Day On the Beach: Is It Good Enough? 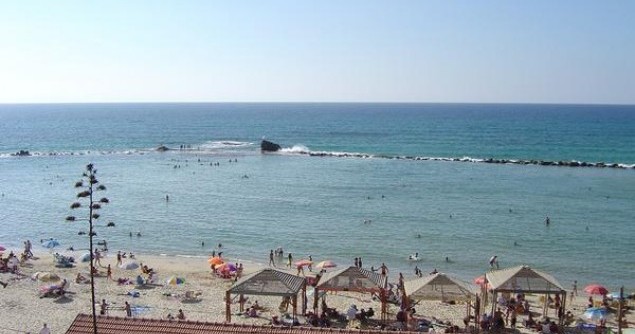 There’s laughter and a happy mix of voices, chatting away in Hebrew and Arabic. It’s yom yam, Hebrew for beach day.

Every summer, a group of Israeli women organise beach trips for Palestinian kids from towns and villages across the West Bank. For most children, it is their first time to visit the beach and swim in the dark blue Mediterranean waters.

Back home, some families can see the sea from their balconies, but cannot go there due to Israeli travel restrictions. During the second intifada in the early 2000s, Israel applied stringent travel restrictions on Palestinians wishing to cross from the West Bank into Israel for security reasons. Many travel limitations are still in place, separating Palestinians and Israelis from each other.

“It’s my first time at the beach”, says Maab, who has come with her mother and brothers from Bethlehem. “And I love it!” she adds. Another young participant cannot believe his eyes. “The sea is so big! I thought it was the size of my school book!”

The project, called Min al Bahar (Arabic for “from the sea”) started about six years ago, when a Palestinian guest at Tzvia Shapira’s granddaughter’s birthday party asked if the sea was far away. “No, only about fifteen minutes”, Tzvia, who is a Jewish Israeli, replied. The guest asked if they could go there, because his children had never been to the sea before.

Says Tzvia: “I felt ashamed that I had never thought about this before. It never crossed my mind that people could be prevented from travelling to the sea. I love the sea so much myself. The sea belongs to everybody.”

Thus, the project Min al Bahar was born. Tzvia recruited her friends. Together they began to organise their now-famous beach trips. The project grew quickly. The trips cost about $50 per participant and are funded completely through donations.

In a 10-day process, the names of potential participants are first given to Israeli authorities in charge of issuing one-day permits for entering Israel. Then there is anxious waiting. Not every person on the list is granted a permit in the end. Sometimes, children are denied a permit because their parents are denied permits.

Not everybody supports the beach trips. Some families do not allow their children to participate, arguing that their children will be disillusioned if they experience the sea but cannot return after this one day.

And on the beach, there have also been problems. Amira, one of the organisers explains: “We used to be at Bat Yam, [a coastal city south of Jaffa]. But we had to change locations. Bat Yam was very crowded and we always had to fight for space. Plus, the lifeguards were not nice. They didn’t want to have responsibility over so many children, so they kept inventing new rules to make it more difficult for us.”

This year, the beach trips have moved to a quieter beach north of Tel Aviv. After swimming, diving, and making sand castles, the group visits a community centre in the old city of Jaffa, where they have lunch and draw pictures of their visit to the sea, or make fish out of coloured paper, pens and wood.

And finally, there is the boat trip, which leaves from Jaffa port with lots of music and cookies for a short cruise on the Mediterranean. “Tel Aviv must be a nice city”, says Iman, watching the Tel Aviv skyline with its long stretches of beach and skyscrapers. The last time Iman went to the beach was 20 years ago. Excited, her daughter leans over the railing, and points to the water. “Look, a fish! A big, big fish!” she says.

At the end of the day, happy and tired, kids and chaperones climb into the bus that takes them back to the West Bank. It has been a good day that leaves participants with a sense of sadness, yet also hope. Even though many new friendships have been formed, most volunteers and participants will not be able to meet again, due to the stringent restrictions that not only limit Palestinians from entering Israel, but also prohibit Israelis from entering Palestinian cities in the West Bank.

As they shake hands and hug good-bye, both organisers and participants agree that they are looking forward to a time when they will be able to travel freely and the sea will be accessible to everybody.

Franziska Kabelitz completed her degree in International Studies and Film at American University in Washington, DC, and is currently based in Tel Aviv and Germany