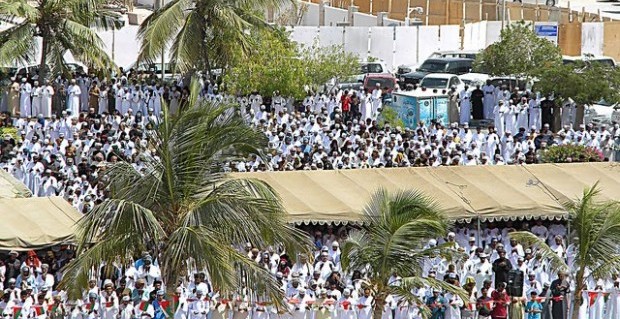 This week, the people of Dhofar are quietly observing the first anniversary of the protests that erupted in Salalah on February 25, 2011. It’s hard to believe that a year has gone by since the day protesters marched through the centre of town with banners demanding reform.

They set up huge tents and a stage in the Minister of State’s parking lot in central Salalah, where they remained for 77 days. The parking lot – nicknamed ‘Freedom Square’ – became the centre of attention during those months. Hundreds of people from all walks of life visited the sit-in on a daily basis to talk about a new Oman.

On Fridays, thousands flocked to the square to listen to the widely anticipated Friday sermons. Temporary food kiosks and water facilities were set up to cater to the needs of protesters, and donations were pouring in on a daily basis to help provide meals.

Dhofar wasn’t the only province that suffered from Arab Spring fever. Despite very little media coverage in most local newspapers, protests were erupting all over Oman.

After negotiations took place between sit-in organisers in different parts of Oman, a final list of demands was delivered to the palace and then printed on a large banner and fastened to the Minister of State’s main gate in Salalah.

The long list included demands for better economic conditions, more jobs for Omanis, freedom of speech and an end to government corruption. During those difficult few months, the government worked through the list in a remarkable and efficient manner.

Royal Decrees were issued on a semi-daily basis announcing jobs, benefits, a new public university, legislative powers for Majlis A’Shura (the closest thing our politically immature nation has to a parliament) and many other major changes.

Unfortunately, the sit-in didn’t end peacefully in Dhofar. By the end of April, many satisfied protesters had gone home, but a couple of hundred who were hoping for more change continued with the sit-in. By then most of the major demands had been fulfilled, and the rest were either unrealistic or required more time.

On the evening of May 12, all hell broke loose in Salalah when the army arrived and aggressively took over the square. All communication services were shut down in Dhofar during the raid and several hundred men who happened to be in the square at that time were arrested and taken to the local prison.

Nearly a dozen key speakers and activists were plucked out of the square by helicopter and taken to a prison facility up north, where they remained for over 50 days.

Unfortunately, I was near the square at the time and had my precious Nikon D90 confiscated by the ROP after foolishly trying to get a shot of locals clashing with the army at the entrance to the square. After being interrogated and forced to wait in my car for nearly two hours, my camera was finally returned to me and I was allowed to leave.

The next morning, supporters flocked to the square and formed another quiet sit-in to demand the release of their friends and relatives from prison. A friend of mine managed to get onto the roof of a nearby building and snap photos of the army during their second raid.

Sometimes I look back at those photos and think to myself, “Did this really happen? How very un-Omani.” For weeks afterwards, the army presence remained strong in central Salalah. They finally withdrew just as our busy monsoon tourist season was starting.

To this very day, most locals frown upon the excessive use of power that ended the peaceful sit-in in Salalah. After all, it really was nothing more than a large communal debate in a parking lot over thousands of cups of tea.

Regardless of what happened, I think the Omani version of the Arab Spring is something to be proud of. Our uprising was a good example of how a nation can work together to create positive change…peacefully. It was liberating and very healthy for us.

At the height of the Arab Spring drama in the Middle East, several renowned international media publications had the audacity to compare the situation in Oman to places like Egypt and Libya. Only those of us living here knew how ridiculous these allegations were.

The situation here was completely different. People wanted economic reform. There was no rebel party and no one was trying to bring down a regime. Omanis wanted to voice their opinions and be heard.

During the past year we’ve broken boundaries that many of us never knew existed. The fact that I can discuss this in a local newspaper is quite something! I’m proud of the protesters for speaking up on behalf of all of us. Without them, tens of thousands of people would still be without jobs and none of these incredible changes would have taken place.

I’m also proud of how the government and His Majesty Sultan Qaboos bin Said handled the messy situation. Excluding those few days of chaos in Sohar, the Omani uprising was peaceful.

Looking forward, one thing is clear to me; with freedom comes responsibility. We can no longer be referred to as a ‘sleepy nation.’ The only way forward is hard work and dedication.

One Response to Oman: We’re No Longer ‘the Sleepy Nation’