Old Jeddah: UNESCO Can’t Save it, so who will? 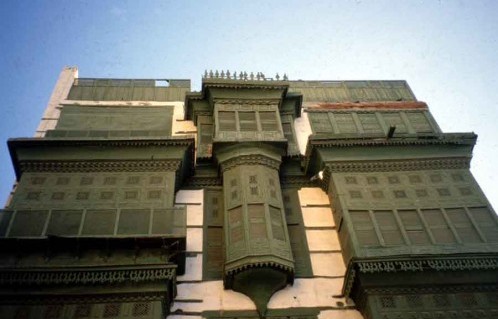 Saudi Gazette/Okaz report that UNESCO has rejected the Saudi application to have Old Jeddah named as a World Heritage Site. The reason, according to the Kingdom’s UNESCO representative, is that the district has been neglected. Neglect is certainly the major factor, I believe. The area, mostly in private ownership, consists of buildings constructed with old materials and old techniques. Using the trunks of palm trees as structural support, walls were made of blocks of coral, held together with mortar made of burnt-coral limestone.

This construction technology is old and relatively inexpensive, making use of readily available materials. The Red Sea coastline near Jeddah is, in fact, an immense coral reef. It was easy—though laborious—to ‘mine’ the reefs for the blocks and to burn pieces of it to make limestone. Date palm trees are endemic to the area. But the climate is harsh. Jeddah tends to be hot and humid, even in the winter, and that leads to the requirement that building be constantly maintained. Whether that’s resurfacing walls with fresh limestone—sometimes colored, but usually white—or replacing the palm beams, these buildings took work and money. Every twenty or so years, walls would have to be torn open to access and replace structural supports. The houses were constantly under (re-)construction throughout their hundred-or-so year lifespans.

Old Jeddah (also called Balad) was, and still is, urban. Architectural plans differed greatly from those used in the Saudi interior. Because the structures were built within the walls of the city, they built up rather than outward. Typically, the ground floor would be used for storage and, often, animal stalls. The next floor up would hold the majlis or (men’s) reception room. Above that would be bedrooms and family rooms. Even higher, there’d be the kitchen—heat rises, after all, and it was obvious that you didn’t need to heat family quarters with the cooking. On the roofs, there were usually outdoor sitting and dining areas, taking advantage of what breezes there were as well as the view.

The major problem to preservation, as I see it, is that the buildings are mostly privately owned. The owners rarely live in the houses because the structures really are antique. There’s no indoor plumbing; there’s only hodgepodge electrical wiring. The streets are narrow and there’s no parking. In fact, the area is responsive to 18th or 19th C. urban needs, not much different from those of the 10th C. Because the owners don’t live in them, they rent them out—Saudis are business oriented, no matter who they are. But because the buildings are substandard to today’s needs and demands, the owners can’t get much in the way of rent. So, they don’t spend much, if anything, on the needed maintenance. It’s not at all rare to read the Jeddah-based newspapers and read of fires or building collapses in Old Jeddah. The buildings are a burden on owners. Had they the permission and the money, I don’t doubt that most owners would tear them down and replace them with modern constructions. The photo below shows exactly that, with an older house to the left and a newer one on the right.

I fear that if Old Jeddah is to become a World Heritage Site, someone—the government or an assembly of benefactors—is going to have to buy up all the properties, eject the current residents, and rehabilitate the buildings using traditional methods. While being rehabbed, rebuilt actually, it may be possible to alter the interiors to accommodate electricity, phones, plumbing, and sewage correctly, rather than in the current and dangerous slap-dash manner. The new owners might be able to rent out the buildings, but that’s not assured.

The government does own and maintain the Naseef House as a museum and cultural center. Just how many museums does the city need, though? With careful planning, it’s possible for the buildings of Old Jeddah to be repurposed, but that’s a lengthy, expensive, and contentious issue in itself.

It very well may be that Old Jeddah, as a historic site, is simply going to be temporary. As the buildings individually give up the ghost, they’ll be replaced by new buildings and Old Jeddah will become a memory, recalled through photographs and websites. I do think the area worth preserving, but I’m not the one with the hundreds of millions of dollars it will take to do so.