Of Women, Water and Sex: A Beautiful, Warm Film 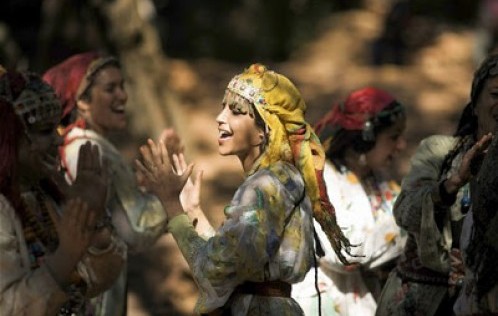 La Source des Femmes is a visually appealing and heartwarming film. Set in Morocco, at its centre is a story about the way change is affecting even the smallest village, and the forces of tradition that are marshaling to resist it.

Leila, (French actress Leila Bekhti), is a twenty-something woman who has married the local school teacher. Later, it becomes clear that she had other life choices, in the form of a city based journalist, who seeks her out.

The opening scene shows the women as they carry water from a well high above the village, burdened with wooden yokes and trying to avoid spilling every precious drop as they clamber over rocks. In the meantime, the men of the village are content with their lot, hanging out in the local coffee shop and going home to cooked meals and obliging wives.

Leila is the force for change, as she points out the inequalities the village women are forced to endure, as they congregate in the local hammam. Many of the other women are reluctant to challenge the existing order, believing suffering is part of their lot. But slowly Leila, with the help of a strong matriarchal character played by renowned Algerian actress, Biyouna, wins them around. The scene where the women sing about what they want, such as “a fridge, medicines and a Mercedes”, as they dance for a group of foreign tourists who have no idea of the words of their song, is one of the funniest of the movie.

The story is based on Aristophanes comedy Lysistrata, about a woman calling for a sex strike to end the war between Athens and Sparta, and that is exactly what happens. The women resist the advances of their men folk in order to lobby for a well in the village, rather than far above it, while the men try in vain to get them to conform.

The local Imam points out the error of their ways, but is argued around by Leila, who knows the Koran better than he does. However, salvation when it comes, is in the form of a man: the journalist.

I won’t give any more away, other than to say that this is a delightful film with a strong sense of humanity. It portrays the village people without patronising them.

La Source des Femmes is in French, Moroccan Arabic and Berber dialect, and the lead actors are mainly French and born in the Maghreb.

Romanian-born French director Radu Mihaileanu (Train of Life;Va, Vis et Deviens; The Concert) has succeeded in creating a metaphor for changing attitudes towards and by Islamic women. But more than that, it is an entertaining piece of cinema which does not indulge in polemic.

One Response to Of Women, Water and Sex: A Beautiful, Warm Film