‘Occupy Mecca’: Time is Running Out To Save City 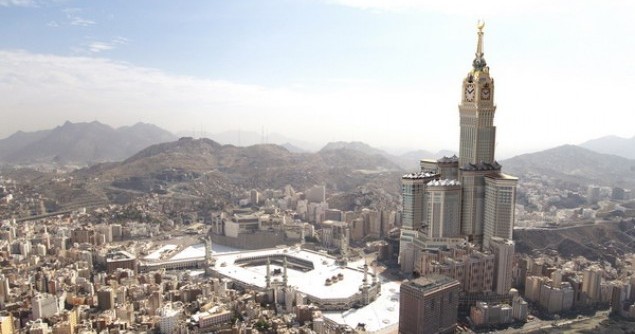 It is time, and past time, to Occupy Mecca.

I am adamantly not talking about a disaster US occupation, a la Iraq and Afghanistan.

What I am calling for is nothing less than millions of faithful pilgrims saving Mecca from destruction.

I would call the destruction imminent, except that it is not imminent. It has already happened.

No, it’s not the Americans, or the Israelis, who would be destroying Mecca.
It’s the so-called Guardians of the two holy sites (Mecca and Medina), the Saudi royal elites, who have negligently stood by over the last two decades as the majority of holy sites in these two most sacred Muslim cities have been destroyed, sacrificed to the false gods of modernization, capitalism, and progress.

Saudi Wahhabis have a long history of destroying shrines, including those of the family of the Prophet in Saudi Arabia and Iraq.

The graves of the descendants of the Prophet now look like dusty rubbles, with only stones to identify them. Armed Saudi policemen beat away and arrest pilgrims who stop to offer their respect.

The early Wahhabis even had designed to destroy the Prophet’s Mosque in Medina, as they assumed that Muslims who were offering blessings and salutations on the Prophet (as the Qur’an commands them to do!) were in fact idolaters.

The Saudis have destroyed or bulldozed some 300 sacred sites and shrines in Mecca and Medina in creating what many are calling the new “Las Vegas.”

Here is some of what the local experts in Saudi Arabia have to say about this cultural and architectural genocide:

“No one has the balls to stand up and condemn this cultural vandalism,” says Dr Irfan al-Alawi who, as executive director of the Islamic Heritage Research Foundation, has fought in vain to protect his country’s historical sites. “We have already lost 400-500 sites. I just hope it’s not too late to turn things around.”And here is what a Saudi Architect, Dr. Angwai, has to say:

“The house where the Prophet received the word of God is gone and nobody cares,” says Dr Angawi, a Saudi architect. “I don’t want trouble. I just want this to stop.”

The Gulf Institute estimates that 95% of the religious structures in Mecca have been destroyed in the last two decades.

The rush to build 5-star hotels for the richest of the pilgrims comes at the expense of historical mosques, shrines, cemeteries, and homes that are being bulldozed one after another to make room for the new Hilton hotels and Chanel (and similar) shopping malls. Many Muslims all over the world see the crass commercialism of these sites as a gross violation of the radical egalitarianism of Islamic teachings so beautifully emphasized in the Hajj pilgrimage.

What was intended to be an occasion to symbolize the unity of humanity standing before the Divine in the most basic of garments is now turned by the Saudi royal elite (working in tandem with Wahhabi clerics) into an occasion to create the world’s largest market for spiritual tourism.

The new Clock Tower in Mecca dwarfs the significance and centrality of the Ka’ba, which has been seen by Muslims as the very center of the Earth and the Temple of God built by Abraham.

The sacred places rooted in Muslim memory have literally been turned into toilets. The house of the Prophet’s wife, Khadhija (may God be pleased with her) was recently turned into a row of latrines.

The Wahhabis don’t hate all buildings. They are spending more than a billion dollars to build the world’s largest tower.

This in an age where one out of every five of God’s creation lives on a dollar a day. Surely we could find a place for this one billion: the wrinkled stomachs of the poorest of God’s children.

For a (polemical) documentary of destruction, see this.

It is time and past time to start an Occupy Mecca movement, to save what’s left of Mecca and Medina.

What we would be saving would not just be the last remaining pieces of the Islamic architecture of Mecca and Medina, it would be our own dignity as Muslims.

One Response to ‘Occupy Mecca’: Time is Running Out To Save City