Nuclear Weapons: The Only Route to Success? 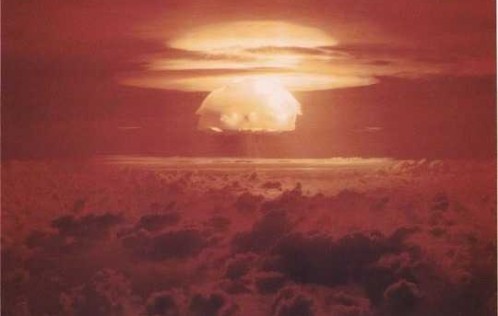 Dr. al-Qarni appears to have gotten up on the wrong side of the bed in his most recent Asharq Alawsat column. In doing so, his grasp of history seems to have suffered.

The good doctor rails against nonproliferation, the idea that more nuclear weapons does not make for a peaceful future. Instead, he sees a ‘hegemony’ on the part of the Non-Proliferation Treaty countries and their quest to reduce the spread of nuclear weapons as an attempt to keep others from threatening their power. He certainly subscribes to the ‘might makes right’ view of the world.

In doing so, he overlooks many things. Does the world not respect non-nuclear states? That’s a rather difficult thesis to support. Switzerland certainly gets a bit of respect yet it is non-nuclear. Australia, Canada, and Brazil seem to manage okay on the world stage, yet they possess no nuclear weapons. Is there widespread disrespect for Japan or the Scandinavian countries?

Perhaps the problem is in countries that see war as a normal part of politics.

Nor, as Dr. al-Qarni represents, did the US reach world power status through its acquisition of nuclear weapons. It achieved that status following WWI, long before atomic bombs were even a dream outside, perhaps, the science fiction of H.G. Wells. The US role in WWII and its economy asserted that status with nuclear capabilities only putting a cap on the matter.

In this piece, Dr. al-Qarni is actually saying more about himself than about the world around him.

The West wages jihad but forbids us from doing so
Dr. Aaidh al-Qarni

How can the West wage jihad but prohibit us Muslims from doing so?

Here I am talking about the fact that the West has produced nuclear missiles yet prevents us from doing so; occupies our lands whilst protecting its own territory, and colonizes our seas and oceans whilst defending its own seas and oceans. Its factories produce rockets, bombs, missiles, frigates, rocket-launchers and aircraft carriers, whilst our factories only produce bubble-gum and Pepsi. The West warns us against acts of aggression and acquiring weapons, whilst it launches attacks and stockpiles arms day and night.

This is because the West is intelligent and knows that power is the source of all stature and grandeur. Allah the Almighty said: “Prepare against them what force you can”. The world respects no one but the strong. As for diplomacy, romanticism, and political sentimentality, this is mere superficial talk to distract and deceive foes, because war is an act of deception. Preoccupying the Middle East with arts, folklore, and cultural ceremonies at the expense of military factories is an open joke. To produce one tank would be better than a thousand poems, a rocket more useful than a hundred cultural shows, and a bomb more effective than a hundred epic tales to remind us of the glory of our forefathers, and what it used to be like in the old days. Does the world respect a state for its peaceful reputation, finesse, tact, and modesty, or for its strength and power? Iran realized this secret, and indeed the Persians are among the most cunning people, described by Umar Ibn al-Khattab as having “the virtue of the mind, with which they rule”.