Not For the Squeamish: The Power of Bawl 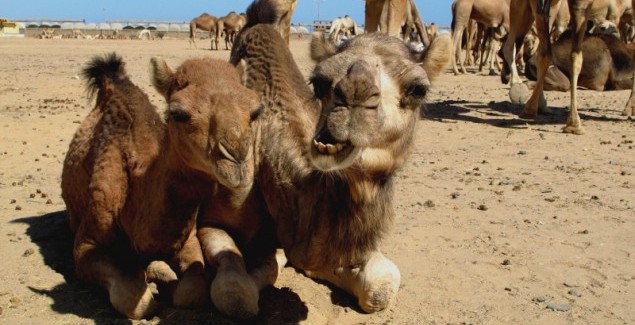 Long time Jeddah residents have always considered Ruhailley part of ‘the desert’. Situated at the crossroads of Madinah and Mecca Roads and ten minutes from the airport it is only a twenty to thirty minute drive from new and old downtown.

The small road side town, with its various small shops and markets, is more like the trading posts in the small dusty so called ‘nowhere places’ further out in the desert along Madinah Road. The new glittering malls, the trendy coffee bars and restaurants on the nearby coastline of Abhur that have become the decor of inner city Jeddah have a lot more appeal for the locals.

Years ago when Ruhailley was initially being developed, the only thing between it and its massive airport terminal were roaming herds of sheep, goat and camels and more intervening desert. Today, with the economy being what it is and the improvement of ring road (named because it connects Mecca and Madinah Roads that links up and downtown Jeddah), people have rediscovered Ruhailley as a cheap alternative to living in Jeddah which is convenient to the city; beach and both sacred Masjids.

Near where Madinah Road mets Mecca Road before Ruhailley, is the final exit to Usfan.  Suddenly rising from the desert, Usfan, a town that pre-dates Islam, has been re-inventing itself in a construction frenzy to extend Jeddah’s urban sprawl. In the wide expanse that was once the exclusive domain of the shepherds and herders in the 40 or so Kilometers between Ruhailley and the airport has now been reduced to a strip of land between the last Usfan exit and the next—known as the highway boundary line between Ruhailley and Usfan. No longer fit for goats and sheep, it had become camel territory and perhaps one of the best benefits of living in Usfan and Ruhailley—the Milk Souq.

Mostly Somalis and Sudanese, the herders that sell in the Souq tend their charge in teams of two or three (depending on the size of their herd) are only visible in the late afternoons when they bring the females (Naaqaat) and their Hashun (calves) to sell her milk and urine. Their customers who are mostly gentrified locals in their high-end SUV’s would buy and drink the unprocessed milk because (usually and most often) their father did. But some (as in my case) buy it for its legendary reputation as an elixir of health; strength and sexual vitality.

The herders are the best proof of this: tall or short they appear the definition of the wealth of good health. When the herder is Sudanese; the miraculous effect of the open air; combined with drinking the milk occasionally laced with camel urine (known as Bawl) brings out a deep radiance to the natural red tint in their blemish-free skin. ‘Bawl’ discussions tend to freak out locals and westerners alike; especially those natives a generation or two beyond the Bedouin life their grandparents and great grandparents once shared. Like Inuit complaining about the cold, my Saudi friends and acquaintances usually display the same squeamish expression when I remind them that bawl and milk were rumored to be all you need to stay healthy far into your silver years. A cure for many diseases and illnesses of all kinds according to Islamic prophetic traditions, recent scientific research has confirmed its medicinal use in even eradicating some forms of cancer.

Aside from the occasional western tourist looking for a photo op, mostly Saudis pull over to the dusty shoulder where the herders set up their stands as one of the routine in the week like picking up laundry. The herders corral their she camels and their young to milk and sell behind small circles of low hanging barbed-wire. Makeshift tables composed of bits of wood once part of something else stand before mounds of dirt and sand that give the seller (and buyer) a clear view of each other from the highway. On the top of most mounds are usually rugs and sometimes couches customers could sit on while watching the camels being milked on the other side of mound.

Behind the mounds, the camels are kept in low wired fence corrals, easy for any long leg Hashi (new born) or Naaqah (its mother) to step over and go about their business if it were inclined—except for having her one front leg tied up by her neck in a rope sling which prevented her from doing anything but standing. A fully mature Naaqah stands 7 to 8 feet high from hoof to head and appears to weigh over a ton. Though the average Hashi is frisky as a stallion fold, new borns seldom wonder more than one to two yards from their mothers. The herders always bring her Hashun (plural for Hashi) along so they won’t get lost or wonder into traffic looking for mommy.

The herders measure the portion of milk they sell by milking the camel directly into the steel mixing bowels that are kept turned over on the tables when not in use. The milk is then pour through flour swifter to remove most of the heady whey before putting it in moderately thick clear plastic bags. The prices range from 10 to 50 Riyals ($3.50 to $10.00 US). The herders try to get as much as they can for the bawl but generally only collect it if someone specifically ask for some. Most of the time camels drink bawl from each other when relieving themselves.

“The first time mothers have the freshest milk,” Omar, a Yemeni colleague and camel milk enthusiast told me once. He took me to the Souk for the first time after a lot of talk about the medicinal qualities of the meat; milk—and of course the bawl. After drinking a cup of bawl in front of me, Omar convinced me to take a sip.

“I never drink it—I’m lactose intolerant,” said the last Saudi I talked to about it (ignoring any mention of camel pee entirely). It has become increasingly true that locals would rather spend a week’s grocery bill at Apple Bee’s than live alongside camels.

Camel milk after a lifetime drinking cow milk can be hard to get used to—particularly with a swig of bawl in it. For those like me who see the juice of the camel a necessary balm for good health, chocolate syrup usually makes it go down a lot easier without diminishing its benefits.

I inwardly chuckle a little to think that while Milk Souq customers drink the unprocessed milk for its health benefits, their pot bellied counterparts (the new; ‘hip’ Saudi or ‘modern’ westerner)  browse the dairy section at the new Geant, Panda and Star Supermarkets for the low fat cow’s milk—passing the camel marqis daily while wheeling back and forth to work in their glistening luxury cars in the belief they live a cleverer; better life.

I used to work in a dairy in Wisconsin and found out the truth about pasteurization and homogenization. These may ‘save’ the human race from some untold diseases in untreated milk but I have never found evidence (or heard ) of anyone dying from drinking it. The real truth is that the process makes unsold cow’s milk last for years. Chocolate milk, one of the last incarnations of cow’s milk in western countries can be up to 10 years old. The age of skim milk approaches the boundaries of ‘ the Twilight’s Zone.’

Just goes to show you, clever is good; but ‘old school’ as is usually the way, is better.

2 Responses to Not For the Squeamish: The Power of Bawl