Nobel Prize for Hina & Malala: Let’s Get Behind Campaign 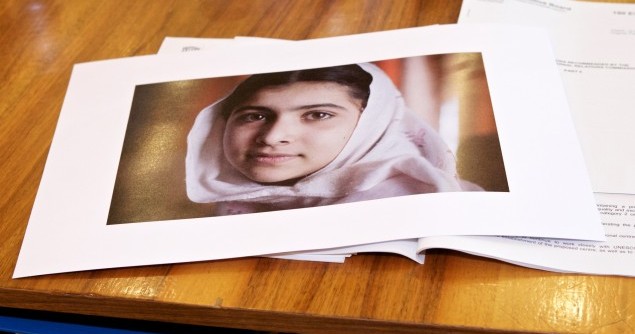 When two teenagers take on the might of the fundamentalist Taliban in a conservative and poor area of Pakistan in the name of education and girls’ and women’s rights, they need all the support they can get.

That’s why I back the global appeal to the The Norwegian Nobel Committee to award the Nobel Peace Prize to Malala Yousafzai, Hina Khan and girls’ education.

While 14-year-old Malala Yousafzai is recovering from being shot in the head by a Taliban gunman earlier this month, the Taliban are threatening to target another Pakistani teenager, 16-year-old Hina Khan.

After the Nobel Peace Prize going to U.S. President Barack Obama (2009) and the European Union (2012) — shocking choices in both cases — what better way to encourage peace than through education generally and girls’ education specifically?

On October 9, a Taliban gunman shot Malala while she was returning home on a school bus after taking an exam in Pakistan’s Swat Valley. She is now on the long road to recovery in a Birmingham hospital in the UK.

On her being identified, the Taliban gunman shot her twice, once in the head and once in the neck. Two other girls, Kainat Riaz and Shazia Ramzan, were also wounded.

Malala is a pupil from the town of Mingora in the Swat Valley. She is known as an education and women’s rights activist in the area, where the Taliban have banned girls from attending school.

She drew attention when, in January 2009, she posted her first anonymous entry to the BBC Urdu blog that would later make her famous. She used the pseudonym “Gul Makai” — meaning “corn flower” in Urdu — so as not to be targeted by the Taliban. She wrote about her life under the Taliban regime, their attempts to take control of the valley and her views on promoting education for girls. Later that year, the Pakistani military intervened, culminating in the expulsion of the Taliban from the Swat Valley.

A Nobel Peace Prize for Malala and Hina will send a clear message that the world is watching and will support those who stand up for gender equality, universal human rights and the right of education for girls.Last week, a red “X” was painted on the gate of Hina Khan’s family home in Islamabad. Hina is also known as activist for education and women’s rights.

After removing the graffiti, the red “X” reappeared the next day and the Khan family got a phone call warning that Hina is the Taliban’s next target.

Her father, Raitullah Khan, said: “A few days ago when I came out of my house I saw a red cross on my gate, which I removed, assuming it might have been drawn by some kids. But the very next day it appeared again, which really terrified me. We [then] received a call that Hina will be next after Malala. We have already been fighting death threats for many years when my wife started speaking for women rights and girls’ education.”The Khan family is originally from the same Swat Valley area of Pakistan as Malala. It was under complete Taliban control from 2007 to 2009. Hina and her family were forced to move to Islamabad in 2006 after publicly criticizing atrocities committed by militants.

Hina first attracted the wrath of the Taliban in 2008, when she held a press conference after militants started bombing schools in a campaign of intolerance against girls’ education.

Her mother, Farhat, is a social worker and was already a target of the fundamentalist Islamic group after organizing a handicraft exhibit for Swati women in 2006 and supporting women rights and girls’ education.

Malala, who cannot speak at the moment, was in a medically induced coma on arrival in Britain on October 15, but has since regained consciousness and has stood for the first time since the shooting. to peace is walked one step at a time, one educated person at a time. Malala and Hina have taken the first steps, at a very high cost. By supporting them, keeping them safe and honoring them, we can help make the world a better place to live.She was struck just above the back of her left eye, with the bullet travelling down the side of her jaw and damaging the skull. It went through her neck and lodged in the tissue above her shoulder blade. University Hospitals Birmingham said Malala “remains in a stable condition.”

2 Responses to Nobel Prize for Hina & Malala: Let’s Get Behind Campaign