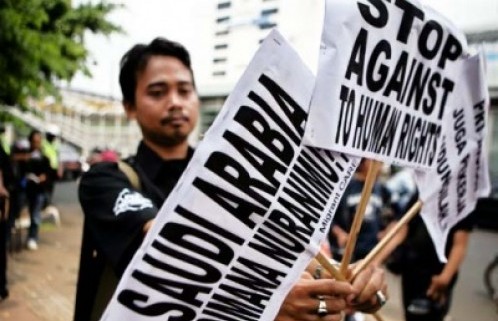 The government of Indonesia has set out new regulations pertaining to the hiring of Indonesian women as domestic servants in Saudi Arabia. They represent quite a suite of demands and Saudis are not pleased. As Saudi Gazette/Okaz and Arab News report, many Saudis are actually quite annoyed.

The regulations are quite intrusive: they demand background checks of would-be employers for criminal records; they require a clear statement of the scope of work, including how many people, of what age and sex, will be the recipients of the worker’s efforts. They also set out a minimum wage for maids and drivers, a figure that puts them out of the reach of less wealthy Saudis.

Frankly, I don’t find these demands unreasonable. I think they should also be accompanied by background checks of would-be domestic employees, though. Employers should also be protected against malicious servants.

I’m unmoved by the outrage of Saudis here. Over the past six months, there have been widely-reported cases of grotesque abuse of Indonesian servants. It doesn’t matter that the abuse comes at the hand of only a few Saudis: the abuse happened. All Saudis are tagged with the abuse by some… the saying about ‘one rotten apple spoils the bunch’ comes to mind.

If Saudis never maltreated servants, there might be an argument against these changes, but that’s just not the case. Saudi abuse of domestic employees is a constant refrain and is reported in Saudi media. It exists. To fix it requires either a change in attitude by employers, or structural protections, as the Indonesian government is now seeking. Slavery was abolished in the Kingdom in the 1960s. The tendency to see domestic servants, particularly from other countries, as slaves has not evaporated, though.

There are many Saudis who treat their servants well. I’m sure it’s the vast majority of them who do so. And yes, there are bad, even criminal servants. But if Saudis wish to employ Indonesian servants—popular because they are both Muslim and good workers—then the employers are going to have comply with the new regulations or find another source of labor. This may well mean a drop in remittances to Indonesia, but that government has decided that protecting its citizens is worth more than the cash flow. Good for them!

RIYADH: In a move to ensure more protection for housemaids in the Kingdom, the Indonesian government has imposed tighter restrictions on the recruitment of women workers.

“Even today, Jakarta continues to send domestic helpers to Saudi Arabia, but the number has drastically gone down,” said Wishnu Krisnamurthi, a spokesman for the Indonesian Embassy.

Krisnamurthi said several new measures to define the relation between the employer and the maid have been announced. The measures require employers to provide details like the workload in their homes and the number of family members including their photographs, copies of identity cards and police certificates. A sponsor or employer seeking a maid or a driver must earn a minimum salary of SR6,000 or SR8,000 a month respectively.

“The new requirements are to help us protect our workers and also convince Indonesian workers back home wishing to work here that they are safe. They are afraid due to the latest cases of abuse they have seen reported,” a source at the Indonesian Consulate in Jeddah told Arab News.

Nonetheless, many Saudis have said the requirements are outrageous and impossible to fulfill.

One Response to New Indonesian Rules on Domestics Irk Saudis