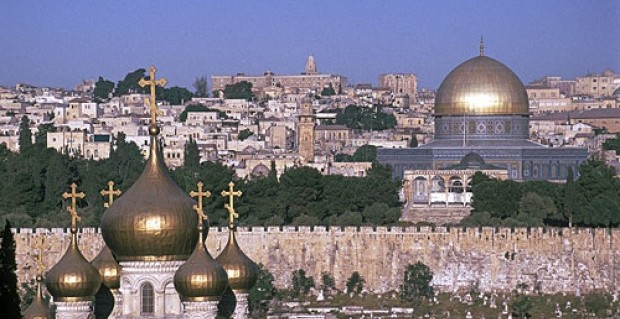 Shira Nesher, an Israeli, stands alongside Fakhira Halloun, a Palestinian, as Nesher tells her story about life in a conflict zone to a group of American university students who are hanging onto her every word. “My family members are Holocaust survivors, and as an Israeli I grew up in an environment of fear and conflict. When I was 18, I enlisted in the Israeli Defense Forces, where I eventually became a military tour guide and an educator…”

When she is finished, Fakhira follows with her own story. “I am a Palestinian Christian with Israeli citizenship. I grew up in a Druze village, as a minority among minorities, with stories of the nakba, the Palestinian catastrophe, in a place where identity limits access and mobility. Now, I devote my life to finding freedom in my native land.”

These two speakers are tour guides with the Middle East Justice and Development Initiative (MEJDI); they are leading a dual-narrative tour for a student group. It is rare to see Israelis and Palestinians telling competing narratives, yet working together. Though they live side-by-side, Israelis seldom meet Palestinians, and vice-versa.

MEJDI is the brainchild of two Jewish Americans – one of whom is an Orthodox rabbi – and one Palestinian who work together at the Center for World Religions, Diplomacy and Conflict Resolution at George Mason University in Arlington, Virginia. They believe that peacebuilding activities must use sustainable business models.

In the past few years, funding for peacebuilding activities has become scarce, and many organisations have struggled to survive. Combining peacebuilding with a profit-making enterprise such as tourism brings new resources to the field and provides a self-sustaining business model.

The emotional and physical journey participants take through the narratives of the Holy Land introduces them to many stakeholders on both sides of the conflict. The groups meet with a rabbi who explains the significance of the Western Wall in Judaism. The exploration continues with meeting an imam at the Al-Asqa Mosque. On a different day, they visit Ramallah and meet with a high-ranking Palestinian official; they later connect with an Israeli politician in Jerusalem.

A Jewish congregation taking a MEJDI tour requested to spend two nights at a Palestinian refugee camp. Two days later, ethnicity, religion and background no longer mattered. The congregation and the Palestinians had forged connections that transcended stereotypes. As they parted, tears streamed down the faces of the Palestinians and Jews alike.

On a different tour, a group comprised of Christians, Jews and Muslims participated in an interfaith trip. The group did not avoid hard questions, and together they experienced some difficult moments. They discussed justice, oppression and the role of religion in the conflict. But there were also moments of simply learning about each other’s heritage and religion.

The experience of exploring different sides of this thorny conflict is not typical of most tours to the Holy Land. Every year over three million tourists visit Israel and Palestine. Many of the tourists come to see the Holy Land and the holy sites without taking time to meet the people who live there. Their tour guide typically wields an enormous influence on the way they understand the culture, politics and roots of the conflict.

By contrast, the MEJDI guides rely on their personal stories about the conflict, while connecting them back to the larger story of their people. It is not about rehashing the gritty historical details that led up to the present situation, but rather about creating greater understanding. Participants are given time to reflect on the information they learn and interact with the guides and speakers to reconcile their feelings with what they heard.

Tourism has the power to be a positive or negative force for change, with the potential to either entrench preconceptions or facilitate the sharing of stories across cultures. Just last year, almost one billion people travelled to other countries. Imagine what would happen if all these tourists used their travels as an opportunity to foster greater understanding.

Aziz Abu Sarah is a National Geographic Emerging Explorer and MEJDI (mejdi.net) co-founder. Talia Salem is a Masters of Tourism Candidate in Sustainable Tourism Destination Management at The George Washington University in Washington, DC and MEJDI’s Director of Operations.