#MyJihad: The Struggle To Reclaim a Word 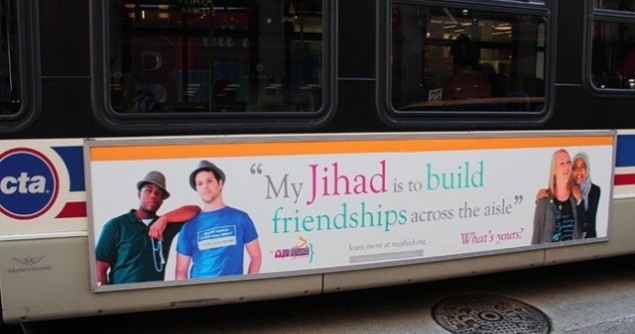 Angie Emara’s son, Adam, was just four-years-old when he died from complications of Hunter’s Syndrome in 2009. Every day since, Emara, 35, of Naperville, Illinois, has struggled with a painful and private grief.

In December, she took her heartbreak public – to the side of a city bus, to be exact. Cuddling with her three grinning children, her youngest clutching a photograph of little Adam, the ad reads: “#MyJihad is to march on despite losing my son. What’s yours?”

It is one of five that appeared on the side of twenty-five Chicago Transit Authority buses last December and debuted in Washington, DC subway stations on 28 January.

Emara and her moving story are part of a Chicago-based campaign known as #MyJihad, an effort to insert a broader, and more nuanced, definition of “jihad” into the public discourse. The Arabic term, often mistranslated as “holy war” or narrowly defined as religiously justified warfare, is at its root actually a synonym for “struggle” or “striving.”

“When confronted with the easy path and the right path, it’s choosing the right path over the easy path,” said campaign founder Ahmed Rehab of Chicago. “It’s a very positive term, one that I want to embrace and not run away from. I believe it means a struggle to get to a better place. It does not mean for me, nor for those whose practice is like mine daily, to pick up a gun and shoot someone.”

Rehab, the Executive Director of the Chicago chapter of the Council of American Islamic Relations, conceived of the idea last fall after hearing that controversial advertisements using the term “jihad” were slated for New York and Washington, DC subways, and Chicago city buses and transit stations.

Rehab said he was startled by how many people, Muslims and non-Muslims, accepted that “jihad” was an inherently violent term. He bristled at the fact that Islamic extremists, as well as those who denounce Islam, both claim to define the term for the world’s 1.2 billion Muslims.

Embracing the broader definition of jihad as internal struggle, Rehab posted on Facebook that his jihad was to work against discrimination and to educate people. “What’s your jihad?” he posted.

The response was overwhelming, Rehab said. People began posting about their personal struggles, from losing weight, to doing better in school, to building bridges between people in their communities.

Among those who took notice were Emara and Chicago-based photojournalist Sadaf Syed. Both contacted Rehab to offer help, and before long were helping to coordinate a Twitter hashtag, Facebook page, YouTube videos, scores of volunteers and a fundraising effort.

“#MyJihad is to build friendships across the aisle,” reads one ad, depicting a Muslim African American leaning against a Caucasian, Jewish man wearing Hebrew lettering on his t-shirt. Another, showing a young woman lifting weights while wearing a bright pink sweater and a headscarf, reads: “#MyJihad: Modesty is not a weakness.”

Yet another shows two young Muslim women, one wearing a headscarf and the other with long brown hair flowing past her shoulders. The caption reads “#MyJihad is to not judge people by their cover.”

Rehab says the campaign has been criticised on two fronts: by extremist Muslims and by those who appear to have an irrational fear of Islam. He is not fazed by his critics.

Emara, now the volunteer coordinator for the campaign, said they are working on expanding the program to other cities, including New York. And an educational campaign, including more MyJihad advertisements, is in the works

Syed, the photographer who has volunteered her time to the campaign, said she has been thrilled to see her work featured so publicly.

“It feels awesome, honestly. The whole goal for me as a photographer is to inspire people, to educate them,” she said. “People always say, where’s the moderate Muslim voice? Where’s the average Muslim American speaking? We are going to speak up for ourselves. We don’t need other people to tell us what Muslims are.”

Monique Parsons is a freelance writer on religion based in Chicago. Her stories have been featured on National Public Radio, Chicago Public Radio and various newspapers.