Muslim-Coptic Relations: Five Books that Spell it Out 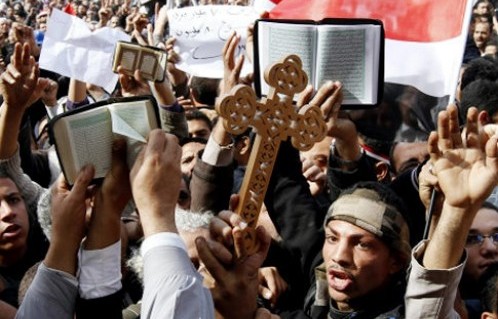 Discussions of Muslim-Coptic relations have been riding the post-25 January swing of hope, denial and despair. In one moment, Muslims and Christians are “one hand.” In the next, nothing has changed. An eye-blink later, we’re headed for armed sectarian doom.

Literature, meanwhile, offers a broader, longer view. The five books below take us from a time when Copts were the majority in Egypt through the good and ugly of the twentieth century.

Bakr’s acclaimed The Man from Bashmour is set in ninth century Egypt – four centuries after Youssef Ziedan’s controversial Azazel. The action takes place during a peasant revolt sparked by an exorbitant land tax and provides a deeply detailed look at early Coptic communities. The book gives life to the medieval-era relationships between Copts and Muslims, and, as translator Nancy Roberts notes in her introduction, helps “to clarify the profound commonalities shared by Muslims and Copts.”

Fast-forward 1,100 years, Ghali’s classic novel sketches the landscape as it stood in the 1950s, in the first years of Gamal Abdel Nasser’s presidency. The book’s narrator, Ram, comes from a wealthy Coptic family, but the Egyptians he describes are a mix of Copts, Muslims, Catholics and Jews. Ram socializes with all these characters, and his mockery of the “kyria lysoon” is one of the few times we see his religious identity emerge. However, the landscape is changing: Ram’s Jewish-Egyptian lover, Edna, is struck in the face with a whip by a soldier and disfigured. Other Jews have already fled. Beer in the Snooker Club shows an Egypt on the precipice of great stagnation and great change.

Set in an Egyptian village in the 1960s, Aunt Safiyya and the Monastery is one of the most optimistic portraits of Coptic-Muslim relations. Taher’s novel, graced by the author’s clear and compelling prose, tells the story of a young Muslim man who kills in self-defense. The widow of the victim demands vengeance, and the killer is given refuge in a Coptic monastery. Taher told Egypt Today, about the book’s reception in the West, “Khalti Safeyya said that things are not that bad [between Copts and Muslims], and this is something they do not want to hear. The BBC interviewed me about it, and the anchor kept interjecting, ‘Surely things are not really as you describe them.’”

Abdelmeguid’s St. Theresa is set in Cairo and Alexandria in the years that follow the 1967 naksa, or Arab-Israeli War. The novella’s Coptic, Muslim, secular and Jewish characters are all looking for rebirth and renewal in a changing political landscape. But throughout, the book’s characters are unable to turn their lives toward positive change.

They are also unable to fully connect with one another. One of the most striking moments comes in St. Theresa’s final pages, when the connection between Budur and Sawsan, a Copt and a Muslim, is lost. “She tries to get close to her but fails. When she spots her, she is glad, but is astonished to see her swelling stomach. Their eyes meet, and everything that had come between them melts away amid the throngs. Budur lowers her eyes. Sawsan tries to stretch her hands out to her, but the flood of humanity is too fast for her, and she is lost in the crush.”

The fifth book takes us to Assiut in the late 1980s. Here, we find the most chilling portrait of Coptic-Muslim relations. Assiut was, in the 1980s, a flash-point of sectarian tensions, and Berry’s recollections – of his time in the Islamist group Jama’a al-Islamiya – offer both a compelling portrait of adolescence and a view of how sectarian conflict begins. The memoir describes Berry’s involvement in both organized and spontaneous violence.

Berry and his young friends say: “We were now equipped to assert our moral authority, and we didn’t let an opportunity escape us. It came to our ears that on the Prophet’s birthday a Christian student had made a drawing of a store selling the special candy made for that day and labeled it The Worm-eaten Candy Store. Some of the brothers waited for him as he left the school and beat him up, telling him not to try making fun of Muslims again.”

And yet, even though the intolerance runs deep, Berry shows us that change is possible. After all, he did it.