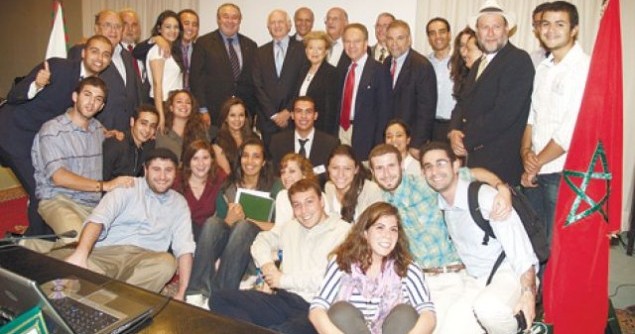 At a ceremony last Wednesday marking the end of the restoration of a 17th Century synagogue in Fez’s Old City, in a message read by Prime Minister Abdelilah Benkirane, King Mohammed hailed Morocco’s “spiritual wealth and diversity” and its “values of coexistence, tolerance and harmony between the different components of the nation.”

These statements were reassuring for a regional political climate that is often turbulent, and suggests that Morocco offers a new – yet in fact very old – paradigm for inter-communal relations, and particularly Arab/Muslim-Jewish relations. In the context of the Arab-Israeli conflict, “Jewishness” and “Arabness” are often positioned as mutually exclusive; Morocco seems to exemplify important ways of reconciling these identities.

I received this impression too when I travelled to Morocco this winter with a group of students, consisting of Americans, Israelis, Amazigh (a non-Arab ethnic group from North Africa) and Christians, Jews, and Muslims. Not only did Morocco offer a fascinating mosaic of religions and cultures, languages and landscapes. But for me, as a Jewish Israeli, it offered important insights and renewed hope.

Jews have lived in Morocco continuously for more than 2000 years, and have played a vital role in the country’s social, political, cultural and economic life. Most Jews had left by the 1960s after the founding of Israel, but a few thousand still remain, occupying various niches in society. Throughout history many were merchants or local craftsmen, while others served as government ministers and advisers to the King.

Most Moroccans we met – from taxi drivers in cities to camel riders in the Sahara, and from academicians to tour guides – were welcoming, and unashamedly highlighted Jews’ positive role in Moroccan society. Jewish cemeteries and places of worship were well kept and protected. Morocco’s new constitution, adopted in 2011 against the backdrop of the Arab Spring, recognises the country’s Jewish heritage as part of Morocco’s national identity.

Importantly, we met with members of Mimouna Club, an NGO founded by Muslim Moroccan students dedicated to learning about the history of Judaism and Jews in Morocco. Such an organisation is rare in the Arab world. All these were encouraging examples that highlight the acceptance of Jews as integral to Morocco.

Einat, an Israeli Jewish participant in our group, was the first from her family to visit Morocco since her grandparents’ departure in 1952. She was welcomed in “her country” by most everyone she met. As she uncovered layers of her family’s past and of her own identity, she shared her personal journey with the group and with friends and family in Israel. Her story, while unique, reflects experiences of many Jewish Israelis from the Arab world.

Einat’s family’s documented history in Morocco dates back to the 5th Century. When her grandparents departed Morocco for Israel, they left behind their homes and belongings, and the graves of their ancestors. In Israel, Einat’s family spent their first few years living in “transitory camps” as refugees. Like most Jews who immigrated to Israel from Arab and Muslim-majority countries, they were marginalised and disenfranchised by the state’s structures and hegemonic culture, which were mostly European and Ashkenazi, Jews who trace their origins to the Middle East via Europe. Moreover, they often had to suppress the “Arabness” of their identities.

As an Ashkenazi Jew growing up in Israel, the predicaments and nuances of Moroccan Jewish identity were largely invisible to me, as their experiences were largely marginalised by, or absent from the local narrative. Morocco enabled me to see and better understand some of these. Though things have changed in the last several decades, in Israel, being an Arab-Jew came to be viewed by most as a contradiction in terms. Yet, Jews in Morocco saw little, if any, contradiction between the Arab, Amazigh, and Jewish dimensions of their identity.

Positive attitudes towards Jews do not necessarily imply acceptance of Israeli policies. Nevertheless, as Israel struggles to define its identity and its place in the region, and as its neighbours challenge its existence and legitimacy, Morocco offers a pertinent example that defies traditional “East-West” categories, and re-contextualises the Jewish experience in the region. By embodying possibilities for reconciling “Jewishness” and “Arabness,” Morocco offers ways for Arab-Jews to understand their own identities in a new light. And as the Arab-Israeli conflict persists, Morocco reaffirms historical examples of coexistence.