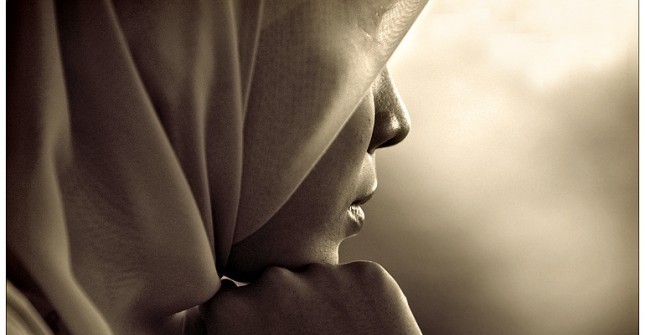 Modesty and anonymity are often confused. Modesty is important, but too often the enforcement of modesty is used as an excuse to impose invisibility and silence on women.

Social norms may dictate that a woman should not say, do or look outside the status quo and should not take a public stand about a public subject. Doing so, she is told, will affect her reputation, and therefore her prospects of marriage and social status. In short, women are too often expected to blend into the background, blurred into invisibility.

In many public gatherings (private ones are a different matter), women are not recorded as being present, as this is not considered proper by many men, and also by some women.

But why is it not proper for the record to show clearly that women were present at a given event? Simply being in a photo or video is surely not immodest.

Whatever reasons are given to justify this exclusion of women, the outcome is that the record indicates that women were anonymous, invisible or absent.

But the presence of women in a nation’s shared consciousness makes it natural for women to be part of its present, and to share in its future.

This normalisation of women in the public space, politics and power is crucial, because it means that women sharing in authority and public life is something we have come to accept; in fact that we don’t merely accept it, but expect it as well.

For me, this is also the reason why quotas and targets for women in leadership positions are so vital: to make it normal for us to see women as leaders. Women need role models to serve as springboards for their own aspirations. Men, too, should come to see powerful and influential women in every walk of life as totally normal.

We can’t change the past, but we can rediscover it. We must do more to raise the status of those women who already hold significant places place in our collective history. And when the historical record appears at first glance to be bare of female figures, we must investigate more deeply. No history is ever devoid of women; women are integral to all societies and eras. We must also ensure that women are seen and heard as a normal part of public life today. This will leave a strong legacy of equality for the men and women of the future.

If you are a woman and you feel shy about having your picture taken in a public meeting, or if you don’t want it known you were there, remember this: people will look at the record of the event and see no women.

For every subsequent meeting, then, this absence of women will be a template for how meetings should be. Just as we look back at history and find a blank where women should have been, so will future generations find that we have failed in the same way.

This is not about the fame or glory of individual women, but we shouldn’t make ourselves invisible under the misguided notion that it is shameful to be seen and known. We have a rightful place in our societies. Modesty does not mean invisibility, because women can be at once modest and visible, humble and powerful. We need to put aside anonymity, shyness and timidity to ensure that everyone knows that women are here, for themselves and for the good of society.

We must be present in our societies. We must make ourselves and our opinions known. This is important for us, and for our future generations.