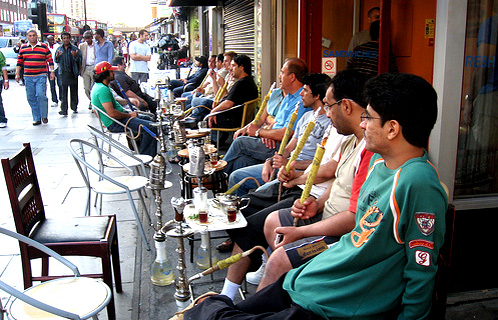 Edgware Road greets you first with its fragrance. The sweet mellow caramel scent wafts gently along the street, invisibly kissing your clothes, and claiming you long after you return home.

Its every paving stone seemingly filled with shisha smokers, Edgware Road runs between Marble Arch and the Marylebone flyover in central London. Some call it Little Beirut or Little Cairo. Once it may have needed these namesakes as reminders of home for the Arab migrants who came to London as early as the 19th century as a result of increased trade with the Ottoman Empire; or the Egyptians in the 1950s, the Lebanese during the civil war, or the Iranians and Algerians after periods of unrest. Whether it is the mix of nationalities and cultures, the British setting or some other factor, Edgware no longer needs an alter ego. It stands as a global icon.

As a Londoner, I visit Edgware Road regularly. The area is always busy, from the Odeon Cinema where Edgware Road meets the arch, past the various sonorously named Ranouches, Marouches and Fattoushes. The eateries, which are part of such large chains as Costa Coffee, Caffe Nero and McDonald’s, feel different here than elsewhere. Veiled female customers chide children. “Mohammed!” “Fatima!” They stop running around. With customers spilling onto the streets until late in the night, it seems even Middle Eastern opening hours prevail. Some of the little shwarma outlets open their doors only as evening starts to set in, as their trade is most ebullient once the young men and women swarm along the road at night, chatting, eyeing, laughing, smoking, sipping.

Outside the summer months, these pavements and restaurants are populated by young hip things, usually Muslim, coming for a halal night out. They race their cars in the frosty November air for Eid al Adha, the men sporting Indian sherwanis and interspersing Arabic street slang in their conversations, the women in colourful Indian clothes, their veils tossed fashionably over their hair. On the weekends, Muslims congregate for shai bi na’na and a shared puff of the scented smoke. 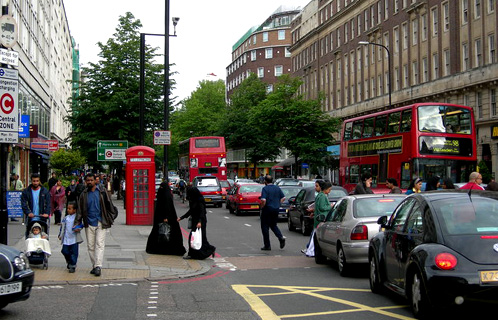 This is the time of year when Edgware bursts into activity as visitors from the Gulf migrate to the fashionable London district to escape the summer heat. As dusk falls, women in achingly glamorous abayas glide along the road, the smell of bukhoor trailing them. Young men gesticulate as they speak on their mobiles arranging the evening’s activities with friends. Fathers march forward furiously, wives and offspring in their wake.

Londoners watch as Edgware Road is taken over, and we, its main actors for most of the year, are overlooked. Are we invisible to the visitors, we wonder? Spend a little time to get to know the local culture and people, we cry.

One of the great charms of Edgware Road is the variety of cultures, languages and ethnicities that populate it. Once, it may have been Little Arabia, but today if you cast your gaze around any cafe you will observe faces, clothing and dialects from as far as China, through Somalia and Sudan, across the Middle East, to North Africa, Europe and the Americas. Edgware Road may have its roots in another world, but now it has its own persona.

I say to those visiting: take a moment to look at its history, its present and its people today. Edgware Road’s microculture hints at an intriguing global multicultural future for the Arab and Muslim worlds.