Driving in Beirut: The ‘Rules’ of the Road 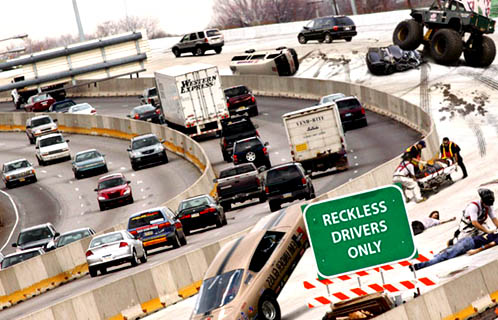 The prospect of driving in Lebanon evokes a keen sense of panic among visitors to the country. It’s loud, chaotic and generally an intimidating experience for the first few days. However, when you get used to it, it’s actually a straightforward exercise, case in point: the roundabout (rondpoint) I drive through every day was initially christened by my father as the “Roundabout of Death”. My wife tells me it’s a form of organised chaos … I fail to see the organization part…

However, there are some cardinal principals to remember and rules to follow:

1. Indicator lights are for the weak. Do not expect your fellow drivers to use them. If they do, it’s done to lull you into a false sense of security whereupon they’ll promptly turn in the opposite direction to which they’re indicting.

2. While driving at night, lights are optional. Consider yourself lucky if the service coming up behind you has a single operational light.

3. Lane markers operate on along similar principles to those in the rest of the world, however instead of driving between the two lines, in Lebanon you should aim to drive along the lines.

5. Speed bumps are myriad in all residential areas. The optimal distance between speed bumps is about five meters.

6. The local residents will ignore rule 5 in order to practice their off-road talents.

8. It is considered the ultimate courtesy to roll down your window and play your music as loud as possible, especially in a residential area after 10 PM.

9. Holes in the road breed overnight. You might well be familiar with the potholes on any given road however, come morning there will, without fail, be another. Refer to rule number 4.

10. Learn to drive in the dark (because of this), training with a blindfold might help.

11. Forget all rules of personal courtesy, it’s a jungle out there. It’s cut-up, or be cut-up. Abide by common decency and you’ll never make it to your destination.

12. Grow a set of eyes in the back of your head. That way you’ll have time to brace for the hit.

13. Scooter / mobilette riders are the Devil. Their favorite game is to ride along on your blind spot and then overtake on the wrong side while cursing at you. Remember, you are bigger than they are.

14. When in a confrontation with another car, judge the value of each vehicle. The person with the more expensive motor has more to lose.

15. Beiruti traffic police are the most ineffectual people I have ever met. Where there’s a long queue of cars, there will be a policeman at the end of it.

*This rant was brought about through losing two tires in the last two months after losing only one in the previous 7 years of driving here.