The Pointlessness of ‘The Red Ribbon Events’ 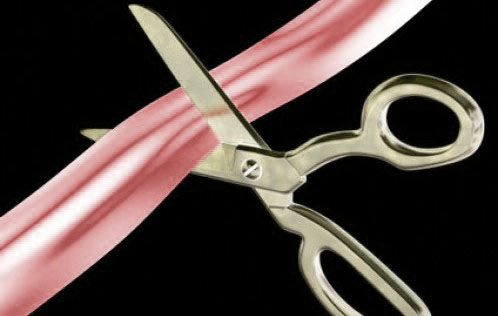 It all started when I was six years old. My first grade teacher would excitedly announce to the class that our school was having an event.

We would be forced to make posters and tidy up our classroom to impress a certain guest of honour who would be visiting our school. A makeshift stage would be set up, speeches would be written, and trash would frantically be collected from the school grounds.

The guest of honour in most cases would be an Omani man, usually between forty to fifty-five years of age. He was almost always a senior government official, be it the Minister of State or the local municipality head.

He would arrive dressed in a crisp dishdasha, khanjar (dagger) and holding a fancy walking stick. The prettiest girl in class was usually chosen to hold the cushion on which lay a pair of shiny new scissors which His Excellency would use to cut the red ribbon at some student exhibition that was put together mostly by teachers.

He would nod and smile as students nervously explained the projects and posters their teachers had made to impress the guest of honour. After a quick tour and obligatory photographs, he would be rushed out by his entourage and it would all be over.

Did the event accomplish something? Was it organised? Not really. However, it didn’t really matter as long as we made it to the second or third page of the newspaper the next day.

In college and high school, student clubs would snooze all year and then there would be a sudden burst of activity when the administration announced an ‘event’. These events involved the usual red ribbons, long pointless speeches in flowery Arabic, tired dignitaries, and many exhibitions put together in a hurry to please the chosen guest of honour.

A few days later, an awards ceremony would be held to honour the students who participated in the frantic assembly of pointless exhibitions for the first event. The ceremony of course included the obligatory checklist of Omani red-ribbon protocol in addition to cheap gifts wrapped in shiny Christmas-theme wrapping paper.

Twenty years later, I’m still trying to figure out why we continue to organise such events. They involve no creativity or passion, and most certainly no humour at all. I mean, heaven forbid should we ever make our guest of honour laugh, right?

To me, these occasions fall under the category of ‘Omani Red Ribbon Events’ .i.e., events with lots of pomp and ceremony but very little content. Over the years, I’m pretty sure I have attended over one hundred events of similar nature, and on every single occasion I ask myself ‘why am I here?’ I know not all Omani events are as boring as my description, but almost 99 per cent of the ones I’ve attended were.

A couple of weeks ago on the occasion of National Day I was invited to attend an event honouring women from Dhofar. The invitation card stated that one hundred women from this part of the country would be honoured for their achievements and contributions to society.

I put on a fancy abaya, grabbed my notebook and pen and headed to the event. For the first time ever, I was actually excited to attend an Omani red-ribbon event.

I arrived at the venue and was immediately told I couldn’t go in through the main door because women went in through the side entrance. I thought that was a little odd considering the fact that the event honoured powerful women.
Nevertheless, I didn’t make a scene and quietly moved myself to the side entrance. In the gender-divided ballroom, I managed to find myself a seat with a good view of the stage and the audience.

As we waited for latecomers to arrive, I was able to survey my surroundings. Over a hundred male guest officials looking uncomfortable in their khanjars, tired looking cameramen, and the familiar table with a mountain of gifts wrapped in shiny gift-wrap.

Nearly an hour later, the guest of honour arrived with his entourage and took his seat in front of the stage. The first five-minute speech felt like an hour. The second speech felt like ten hours. People began to play with their phones and stare at the ceiling. I began to lose hope.

When the final speech ended, I clapped half-heartedly along with everyone else and waited for the exciting part. When the master of ceremonies finally appeared with a list of names and the guest of honour was invited onto the stage, I sat upright.

The first name was read, then the next, and people began to turn around and look at each other in confusion. It finally hit me that they were going to quickly read out a list of names without indicating who the women were and what they had done to deserve the award.

The names were being read so fast that at one point there were about ten women congregated in front of the tiny stage trying to figure out whose turn it was. After about eighty names, it was abruptly announced that the event organisers were handing the guest of honour a trophy.

Camera flashes went off and reporters gathered around the stage. Before the forgotten twenty women or so could object, dinner was announced and everyone stood up. One of the organisers unapologetically told our table that someone had lost the last page of names. Disappointed, I left the event.

Despite the event being wrong on so many levels, there was plenty of media coverage over the next few days as expected and the event was even featured on the news!
Till today, I have not been able to discover who those women were and what their contributions were to society. Perhaps I’ll never know. What I do know is that the event was a replica of all the other pointless events I have attended over the years. If you want to renew my faith in Omani event management, invite me to something interesting. La fin.