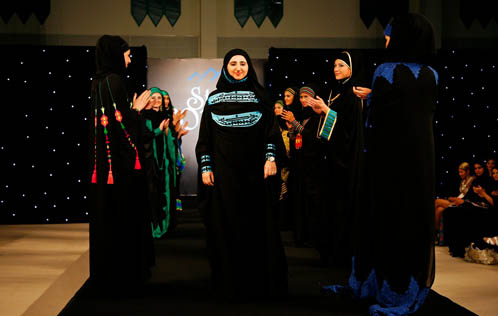 Men are poor helpless creatures who can’t control their feelings or libidos, or so it seems they want society to think. I’m a believer in the general goodness of most men, but baffled by the attitude that they are helpless in the face of womanly charms and must therefore refer to themselves in derogatory and weak ways.

Take this comment – a mild one compared to many – I came across while reading about a new line of Islamic fashion: “If a girl attracts other males even unintentionally, it will end up to be a sin [sic] … So style in Islam is OK, but it should be limited to an extent that won’t create new feelings within the pervert males of today.”  Baffling that it’s not the “pervert males” responsible for their warped feelings.

This is on the same dimension as arguments against women being educated, or driving: that they will spread “corruption” by entering the public space. Or recent comments by the former head of the women’s studies department at Bangalore University telling women how to dress to avoid rape, but no edict telling men not to rape.

We get it: men think women are the source of corruption and that in order to stop the world coming to an end you must tell us what to think and how to act (and what to wear) because of course we have no brains, no sense of social responsibility, no spirituality and no reason. Oh wait – you say we do? Because that is just logic? And because it is our human fitrah to have all of those? And because the Quran says that we are all equal in spirit? Oh right.

It takes two to tango, so even if your outrageous idea that women are responsible for “corruption” is true, why don’t you stay away from them? Too weak? Oh dear, how can you run a society if you are too weak to resist a woman?

So now you have a choice in the arguments you employ: are you too weak in the face of women’s “corruptive” influence, which therefore means you are too weak to “lead” them? Or are you strong enough to lead, which means that it should be water off a duck’s back if women participate in society. Which is it to be?

I want to emphasise that I believe both men and women have responsibilities to act and dress modestly. To achieve social harmony, creativity and spiritual ease, both must participate fully but be equally modest and respectful.

So brothers, fathers, male colleagues – extend a little respect to the womenfolk around you. They are not toys, slaves, maids, objects or chattel to be bought, sold or bartered. Women are people. Yes, people.

And if you are a man from a society that isn’t majority Muslim in culture (note my use of the word “culture” and not the phrase “Islamic in religion”), please don’t look smug. There is plenty of oppression, abuse, violence and discrimination against women in all societies that no man – and no society – anywhere can be holier than thou.

So for men and societies everywhere, here are your mantras for 2012: be nice to women, be respectful of women’s intelligence and change yourselves instead of blaming women for the “pervert males”.