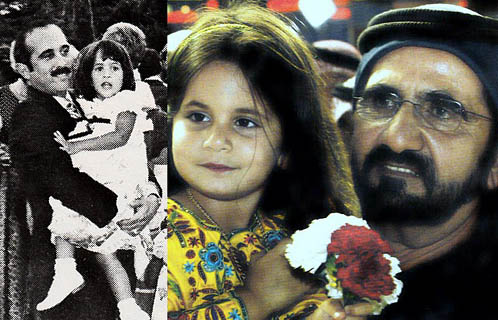 The color picture on the right shows little Sheikha Al Jalila in the arms of her father, HH Sheikh Mohammed Bin Rashid Al Maktoum, Vice-President and Prime Minister of the UAE and Ruler of Dubai. The snapshot was taken at last month’s Dubai World Cup and appears in this week’s Hello magazine.

The black and white photograph on the left was taken some 33 years earlier at the Zahran Palace grounds in Amman. It shows Jordan’s Prince Mohammed holding none other than the mother of Sheikha Al Jalila, HRH Princess Haya Bint Al Hussein.

I was much honored to have been invited to cover the wedding, on 15 June 1978, of the late King Hussein of Jordan to Lisa Halaby, now Queen Noor.

I saw Sheikh Mohammed holding Sheikha Al Jalila on TV the night of the Dubai World Cup and it immediately reminded me of the 1978 photo of her mother, HRH Princess Haya, in the arms of her uncle. It took me some time to find, but I did in the coverage of the wedding in Monday Morning, the Beirut English-language magazine I worked for at the time.