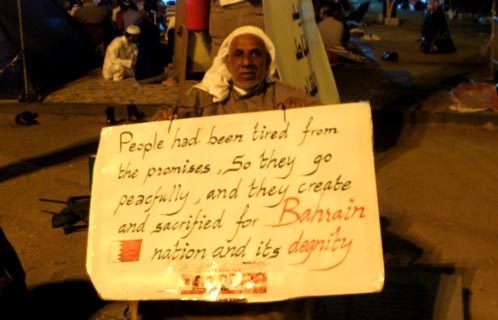 It has been three weeks since the protests in Bahrain reached their violent peak. Security forces cleared the Pearl Roundabout of protesters before dawn. The following evening, shots rang out, scattering a nearby procession and inundating Salmaniya Hospital with casualties, some fatal.

Perhaps sensing that any chance of a peaceful resolution of the crisis hung in the balance, the government backed off. It removed its tanks, armoured personnel carriers and black-clad security forces. The protesters came flooding back to the Pearl Roundabout.

Since then, there have been meetings between the government and opposition groups. An announcement of twenty thousand new jobs to be created by the Ministry of the Interior. The release of a number of prisoners. Demonstrations and counter-demonstrations across the island on a daily basis – all peaceful. One or two incidents of violence with sectarian undertones, but not involving the security forces.

As efforts by the government to promote national dialogue continue, opponents of the status quo across a wide range of opinion and interest have been attempting to form a common front.

The economic consequences of the initial violence and subsequent stalemate have been severe. The Formula 1 Grand Prix cancelled. Cruise ships excluding Bahrain from their ports of call. Conferences, a large source of income for the hotels, cancelled. A marked decrease in visitors from Saudi Arabia who cross the causeway for weekends of fun. Restaurants, traders and hotels reporting a downturn in business.

It would be unfair to say that Bahrain is in paralysis. But clearly there is a sense of “wait and see” that will continue until some form of national consensus emerges.

Since February 18th I have gone about my normal business without any sense of personal threat. There has been the odd traffic snarl-up caused by demonstrations. But by and large the city has continued to function. I had no desire to gawp at tanks and razor wire, and although I pass by the Pearl Roundabout occasionally, I have not stopped.

Last night, however, a friend offered to take me on a guided tour of the now-famous heart of the protests, and I found it impossible to say no. I spent about four hours at the roundabout, and here’s what I saw.

For Westerners who read this, I can best describe the scene as cross between a massive street party and Glastonbury with attitude. We parked up about a quarter of a mile from the roundabout, because the whole area is effectively a pedestrian zone. A few cars come in and out with supplies, directed by young volunteers with yellow fluorescent jackets. As we came closer to the centre, we passed by many tents. Each village has its own tent, and some are handing out free food and cups of tea from counters bedecked with slogans.

Pearl Roundabout is close to a major highway that links the island of Muharraq to Manama, and goes south as far as the Grand Prix circuit. All around the area, every available wall and underpass pillar is covered with paintings. Many refer to the current issues. Most have a strongly patriotic theme – one Bahrain, no Sunni, no Shia. The few remaining spaces on the walls have little inscriptions saying “reserved for ……”.

The area thronged with people. Men and women wandering around carrying flags, or crowding around the booths set up by people wanting to make their personal points. There are symbolic coffins of those who died in the protests.  A basket containing spent tear gas containers and cartridges. A monument to one of the protesters – flowers, candles and photos – in the exact spot where he died by the side of the road. I was shown a lamppost with what appeared to be bullet holes on one side and lumps on the other – presumably where the bullets came to a stop.

Everywhere are pictures of the dead. Lying on hospital gurneys, peppered with buckshot. One horrific image of a protester who appeared to have been shot at close range.

The organisers have created a concourse on the road circling the roundabout. All around the Pearl Monument is evidence that this is not an impromptu gathering. There’s a media tent, and a medical tent with ambulances standing by. Doctors and nurses on 24-hour rotas treating minor ailments. Teams of youngsters doing the rounds with collection boxes seeking donations.

I saw no evidence that the area was a health hazard. There were garbage trucks and bins in abundance. Every so often, there were requests through loudspeakers for people to pick up litter.

Beside the monument itself, there is a large stage. I saw speeches, prayer sessions and impromptu theatre  – for example, fishermen explaining how their traditional fishing grounds had been destroyed by landfill projects. Away from the main stage are other stands where videos were showing or people were speaking though makeshift public address systems. The whole effect was a constant cacophony of competing voices and sounds.

Wherever we walked, we would come across evidence of an explosion of creativity that the protests seems to have sparked. In addition to the wall paintings there are cartoon exhibitions, a tent where artists where creating new paintings. A photo gallery showing dilapidated buildings. Aerial photos illustrating alleged land grabs.

And then the people. Young and old, men and women. Manning stands, sitting outside the tents smoking shisha. Making tea, baking bread. Crowded around released prisoners and other notables. Shaking hands and embracing. Draped with flags. Wandering around in small groups, chanting “no Sunni, no Shia, we are all brothers.” I was introduced to relatives of the deceased, to doctors manning the medical tent. People would come up and shake hands, and point me towards one stand or another. Everyone I met was friendly and welcoming in the best Bahraini tradition. I drank many cups of tea.

Earlier on I drew a comparison with Glastonbury. But not the well-patrolled, fenced-off commercial rock festival that Glastonbury is today. But the original festival I first camped out at forty years ago. Makeshift, informal, cooperative, with a strong sense of community and volunteer spirit. The people of Pearl Roundabout are not new age dreamers with a vague sense creating a better world. They have made common cause to address what they see as fundamental grievances. Whether that sense of unity will survive the difficult decisions facing all parties in Bahrain remains to be seen.

Pearl Roundabout is not a tourist attraction. It clearly exists to persuade and to rally. Most of the star reporters from the international media have left Bahrain. Some are now dodging bullets in Libya, or watching the slow-motion demise of President Saleh of Yemen. I didn’t get a sense that the slogans, exhibitions and speeches were for any audience other than the Bahrainis themselves. During the four hours I spent there, I only saw one other person who looked like a Westerner.

As is the nature of these events, there is no semi-permanent settlement around which the government supporters are encamped, so there is no comparable experience for them beyond the frequent demonstrations of support.

I didn’t go to the Pearl Roundabout to form an opinion on the rights and wrongs in Bahraini society. These issues are well known and exhaustively debated both in the conventional and the new media – my opinion is largely irrelevant. I wanted to witness a human phenomenon.

As I walked back to my car after an extraordinary evening, I was left with the feeling that the men women and children gathered there were going through an experience that would never be repeated, that would remain with them for the rest of their lives. An event that they would recount to their children and grandchildren in decades to come.

And I sincerely hope that all Bahrainis will look back on 2011 as the year in which old enmities were put to rest and the country once again regained its reputation for prosperity, tolerance and inclusivity.