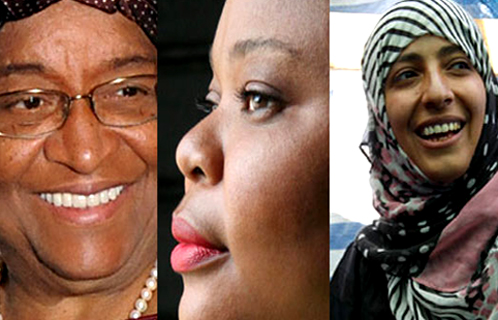 I was thrilled to learn that this year’s Nobel Peace Prize had been awarded to three women for their non-violent struggle towards women’s rights and peace-building.

Ellen Johnson Sirleaf is the President of Liberia and Africa’s first-ever female elected head of state. Leymah Gbowee is a Liberian peace activist who worked across the country’s religious and ethnic divides to call for an end to the 14-year civil war.

But perhaps the one who has garnered the greatest attention is Tawakkol Karman of Yemen. A Muslim woman from one of the world’s poorest countries who once wore a face veil seems an unlikely candidate for a global peace prize. That’s because her religion, her gender, and her politics raise some challenging questions across the political spectrum.

On the one hand she is a Muslim woman, and chooses to wear a headscarf. Her work towards empowering Yemeni women began long before the Arab Spring. Does that, finally, demolish the myth that a practising Muslim woman cannot be a feminist?

Karman wears her faith proudly, and has spoken about how she believes: “Islam is a religion that encourages freedoms and was based on the liberation of the bodies and the minds from slavery, oppression and fanaticism.”

Her long history of activism challenges those who believe women of faith cannot contribute to women’s empowerment, nor to the peace process, unless they exit their supposedly “oppressive” religion. Karman’s strength and cultural power is derived from her religion. This point is underscored by the other two prize winners, who also have drawn on religion in their peace efforts.

I was pleased to see that the award was shared across women from different backgrounds and cultures. It is an acknowledgement that this continues to be a pan-global struggle and that there is no “one size fits all” method of improving the status of women. Women all over the world in different backgrounds are working in ways suited to their context, and not necessarily “western feminist” ways.

One of the profound challenges that Karman’s prize raises is to the Muslim and Arab worlds. For those who feel pride in her recognition – particularly men – the red glow of your cheeks is not sufficient. Your pride must be demonstrated by supporting her work in improving the situation of the women around you.

And I am just as sure that her award will have detractors who claim that it is a politically motivated conspiracy to “westernise” Muslim women, or that she was chosen before other possible winners because she removed her face veil. If that is the case, then why aren’t you showing your own recognition of the amazing Muslim women who are protesting, struggling and being killed side by side with Muslim men? Otherwise the only conclusion is that you are willing to reap the benefits of women’s struggle, but are too egotistical to give recognition where it is due.

I for one am proud of her achievements and the recognition that she has deservedly gained, and you should be too.

This column was first published in UAE newspaper, The National