Nigella Lawson: Being Brave to Wear a Burqini 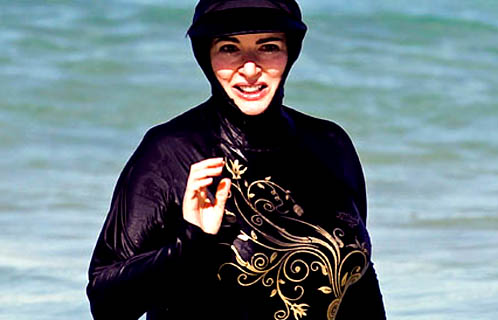 Nigella Lawson has unwittingly moved forward the debate about Muslim women and the way they choose to cover their bodies.

Lawson, a celebrity TV chef, is famed for being proud of her curves and for eschewing the pressure on female stars to show off skinny bodies.

Last week, she was spotted on Australia’s famous Bondi Beach sporting a “burqini”. This is an all-over black bodysuit with cap that covers almost every inch of the female form apart from the face, hands and feet. Islamic swimwear like the burqini is something that has seen a rapid rise in popularity in recent years, usually worn by Muslim women wanting modest dress by the beach.

Newspapers are keen to plaster their pages with photos of female celebrities in bikinis, commenting on either how “hot” she looks, or disparaging unsightly flesh as unsuitable for public display.

So what would the press make of the voluptuous chef covering herself up and denying the paparazzi their expected moneyshots?

A columnist in the conservative Daily Telegraph newspaper indulged in some mockery at the supposed horror of Lawson’s attire: “The world stopped spinning this week when a woman wore some clothes on to a beach … You can’t just turn up on a beach in this day and age covered from head to toe and showing only the bare minimum of flesh. It’s offensive, and this so-called woman needs to realise that.”

That’s obviously what Muslim women are told all the time – that covering up is offensive to “our” values, in today’s “modern” and “liberal” age. Yet, here was one of their own, covered unapologetically from head to foot.

The surprise of the whole incident was that alongside the expressions of horror and criticism at Lawson’s level of covering was the begrudging hankering to follow Lawson’s lead, to which many female commentators admitted.

Some echoed Lawson’s own logic behind wearing the all-in-one: to protect sun-sensitive skin. Others suggested her choice was a snub to the media piranhas who feast on female bodies. But there was one additional thread of realisation: that maybe, just maybe, here was an escape for women from relentless body fascism.

“This must be what people mean by the “liberation” and “privacy” of the burkini – by refusing to strip to what is effectively skimpy underwear, non-Muslim women such as Lawson are saying: “To hell with your fake tans, diets, ‘bikini-readiness’,” wrote one commentator in the liberal Guardian.

And that is the whole point of the realisation that Lawson’s actions have prompted: that women don’t have to submit to baring all.

“Was there a woman in Britain, I wonder, who didn’t feast their gaze on Nigella and who didn’t on some level think … I wish I was brave enough to do that?” asked Rachel Johnson, sister of the London mayor, Boris Johnson, in The Times, a conservative tabloid. “Nigella’s capacious burkini has clearly liberated her, and there must be a positive message for us all in there somewhere.”

Lawson’s fear of sunburn may have inadvertently prompted the realisation that there is liberation in covering. This is something that Muslim women like me have expended much effort in explaining and defending. But maybe we can now move on from this constant need for explanation, defensiveness and the vague sense of liberal apologetics that occasionally appears. Perhaps it’s time to be a bit naughtily smug and say: we already told you so.

3 Responses to Nigella Lawson: Being Brave to Wear a Burqini