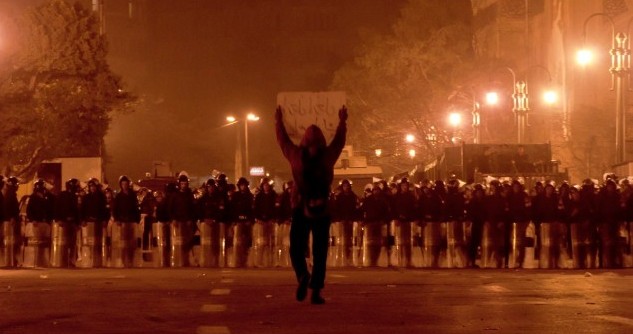 Two years after the 25 January Revolution began and Egypt is still teetering on the edge. Most recently clashes occurred between demonstrators and police forces when tens of thousands across the country took to the streets to mark the second anniversary of the revolution. It feels like no sooner has a cycle of violence abated than a new one erupts. Many wonder how a peaceful revolution that earned the world’s admiration two years ago has sunk into this quagmire of unrest and uncertainty. And many more are wondering: is there a way out?

History shows that many revolutions have been associated with longstanding waves of violence. But history also teaches us that national reconciliation and dialogue can provide a smooth, non-violent way out of vicious cycles of violence; take South Africa as an example. Now, more than at any other time, a similar change is required at the religious, political and grassroots levels to reduce the level of violence in Egyptian streets.

Some of Egypt’s religious establishments are playing a role in reducing the on-going violence already. Al-Azhar and the Coptic Church championed an initiative to denounce violence used by all sides on 31 January. Key Islamic and opposition parties and revolutionary youth representatives signed a document committing that they would not use violence to resolve political disagreements. They also agreed to start a national dialogue to put an end to the volatile situation.

Since our democracy is still in its infancy, political inclusiveness and power sharing among political forces is imperative. Egypt’s chronic social and economic problems are too big to be solved by one political party. A coalition government, including qualified politicians from Islamic and secular parties can at least bring about stability in the volatile political scene and cause the tide of violence to subside.

Perhaps one of the causes of the recent wave of violence is the Constitution. Thirty-six per cent of Egyptians rejected the new constitution drafted by the Constitutional Assembly, which was dominated by Islamic political parties. Almost all members representing secular parties, professional syndicates and the Coptic Church withdrew from the Assembly before the final drafting of the Constitution. In 1997 South Africa, the African National Congress and the National Party negotiated a number of guiding principles before sitting down to draft the constitution and put it up for a referendum. A durable, negotiated Constitution written by consensus may be one way forward.

Still, more is needed to curtail the current wave of violence. It is important to address the roots of violence, which include security, social and economic factors. A departure from the pre-revolution abuse of the state’s coercive power and respect of human rights are needed. Hence, the government, in cooperation with concerned human rights organisations, could introduce new legislation reshaping the relationship between citizens and the police.

The majority of Egyptians are struggling to make ends meet and are reeling from worsening economic conditions in the aftermath of the revolution. Introducing laws addressing longstanding social and economic injustices, such as progressive taxes based on income and full health insurance for all citizens, could also be a step in the right direction.

Last, in order for the current cycle of violence plaguing Egypt to subside, people need to feel that the judiciary is independent. A great deal of the violence that swept the country over the past two years – and during last weeks in particular — is due to the fact that people feel the court rulings are susceptible to government intervention. It is imperative that the regime institute rule of law and independence of the judiciary.

While the Egyptian regime is required to take many steps to reduce violence, demonstrators also should not resort to violence. Violence begets violence. The realisation of these goals will only come through peaceful change, including getting involved in shaping new laws and government norms.

Egypt demonstrated its ability to survive significant waves of violence in the 1980s and 1990s. A more sustainable peaceful future requires a concerted effort by political elite, religious leaders and the Egyptian people.

Mohamed El-Sayed is an Egyptian journalist.