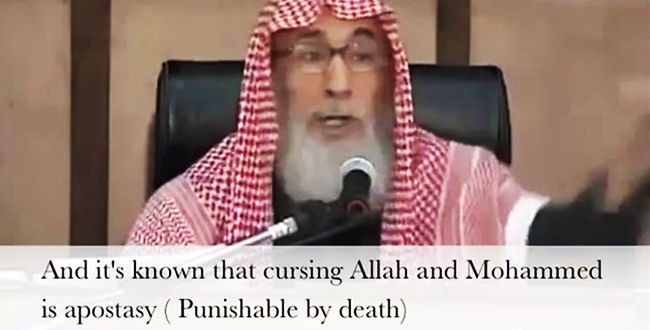 Demands for religious and speech freedoms in Saudi Arabia have taken a heightened tone of urgency in the Western media following Saudi journalist Hamza Kashgari’s ill-advised tweets allegedly denigrating God and the Prophet Muhammad. Imaginary conversations with the Prophet, deemed an insult in Islam, landed Kashgari in jail pending trial for blasphemy.

Kashgari’s remarks have sparked outrage in the West over how a man’s seemingly crisis of faith could lead to a death sentence. Yet there is little to debate in Saudi Arabia: Blasphemous statements require harsh punishment.

Kashgari had the poor judgment to tweet imaginary conservations with the Prophet with statements that included, “On your birthday, I will say that I have loved the rebel in you, that you’ve always been a source of inspiration to me, and that I do not like the halos of divinity around you. I shall not pray for you.”

The reaction on Twitter was instantaneous with 30,000 people condemning his remarks. Many called for his death. Some Saudis created a Facebook page titled “The Saudi People Demand the Execution of Hamza Kashgari” with a membership of more than 13,000 people.

Kashgari attempted to seek asylum in New Zealand, but was detained in Malaysia and returned to Saudi Arabia where he awaits trial.

The tragic and strange case of Kashgari points to the fine line between freedom of expression and the religious obligations of Muslims. The issue is also rife with political implications that complicate Kashgari’s ability to obtain justice. His predicament also highlights the Western media’s myopic view of Muslims and the inability to explain the nuances of Islam.

Kashgari does have the death penalty looming over his head, but his execution is anything but certain. For one, Saudi Arabia has no specific laws for blasphemy. The Saudi judicial system allows judges to define the crime of blasphemy and decide punishment if the defendant is found guilty. The court also must consider Kashgari’s mitigating statements in which he apologized for the tweets and repented.

Contemporary Islamic scholars generally agree the death penalty is not mandatory if the individual repents.

If only it was that easy. The absence of codified laws and Saudi Crown Prince Nayef’s recent comments that Saudi Arabia is a nation of Salafists make it almost impossible to predict Kashgari’s fate. Salafism, which is a conservative form of Islam, permits repenting to avoid execution for blasphemy. But Kashgari and his legal team only have to look to the 2008 case of Sabri Bogday to recognize the uncertainty that lies ahead. A Saudi judge convicted the Turkish barber of blasphemy and sentenced him to death. Bogday confessed that he “swore at Allah” during an argument with a Saudi in Jeddah.

Bogday’s lawyer, Abdul Rahman Al-Lehem, said the judge refused to allow Bogday to repent, although judges in other blasphemy cases allow individuals to retract their words.

According to the Jeddah-based English language daily newspaper Arab News, Bogday’s death sentence stemmed from a ruling based on huddud, or crimes against the rights of God. The judge chose not to issue a ta’azir ruling, which is based on Sharia and are crimes against public security. There is disagreement among Islamic judges whether blasphemy and apostasy are even huddud offenses. But Bogday escaped execution thanks to a pardon by King Abdullah and Saudi authorities deported him to Turkey in 2009.

To add further confusion, there is nothing in the Qur’an that clearly identifies blasphemy as a specific crime. Rather, the offense stems from incidents recorded during the Prophet’s lifetime and defined later by Islamic scholars as “reviling” God or the Prophet. The most prominent incident involved the killing by Muslims of poet Ka’b Al-Ashraf, chief of the Jewish tribe Banu Nadir, who denigrated the Prophet and plotted his assassination.

Notwithstanding the veritable crapshoot Kashgari faces in the kingdom’s legal system, Saudi Arabia has demonstrated some measure of consistent leniency in blasphemy cases. The last known execution for blasphemy was 19 years ago when Sadiq Abdul-Karim Malallah, a Shi’ite, was executed following convictions blasphemy and apostasy. It’s unclear how the charges originated, but Malallah’s execution followed his refusal to agree to a Saudi judge’s request to convert from Shia to Sunni.

Schoolteacher Muhammad Al-Harbi was sentenced in 2005 to 40 months in prison on a blasphemy conviction for discussing the causes of terrorism and Christianity and Judaism.

In 2006, journalist Rabah Al-Quqai wrote about hardline Islamists’ strict interpretations of the Qur’an and warned of extremists intending to attack targets in Riyadh. He avoided prison by promising to defend Islam in future articles.

Like the Kashgari case, many Saudi blasphemy cases stem individuals’ personal views of Islam. To the Ummah, one’s relationship with Allah is a matter best kept to one’s own counsel. While the Muslim world largely embraces freedom of speech, it parts ways with the Western interpretation when discussions turn to Allah and the Prophet.

“You can belong to any of the four schools of thought in Islam – Hanafi, Shafi’i, Maliki or Hanbali – but when it comes to Allah and the Prophet, peace be upon him, no one is to ever question or challenge them,” one Saudi told me recently.

While Kashgari’s tweets are egregious in the minds of Muslims and leave no doubt among Saudi authorities that blasphemy and apostasy charges are necessary, the wider issue remains whether Kashgari’s activism will play a role in whatever punishment he is likely to face.

Kashgari told The Daily Beast website that he was a “scapegoat for a larger conflict” over his comments. “I view my actions as part of a process toward freedom,” he said.

“I was demanding my right to practice the most basic human rights – freedom of expression and thought – so nothing was done in vain.” In a tweet, he wrote that Saudi women “won’t go to hell because it’s impossible to go there twice.’”

Although his views on women’s rights probably will never be aired in a courtroom, his feminist advocacy looms large among influential conservatives who have aggressively condemned campaigns by Saudi women and their male supporters for the right to drive a car and to ease or drop male guardianship laws to make it easier to find employment or pursue an education.

Conservatives have waged a campaign to silence reform-minded Saudis by attacking their faith, making Kashgari a prime target.

In effect, the Saudi conservative establishment views his tweets, compounded by his attitudes towards a liberal democracy, as evidence of pattern of conduct to erode the fabric of Saudi society. The Saudi legal system criminalizes such conduct as criminal offenses, although there is no precise definition.

Despite the vagaries of the Saudi judicial system, Kashgari’s death sentence is not a sure thing if the courts follow Salafism and accept his repentance.

But add his political activism to his ill-tempered religious remarks and Kashgari may find the path to re-enter Saudi society a difficult journey.

This article originally appeared in the International Policy Digest.