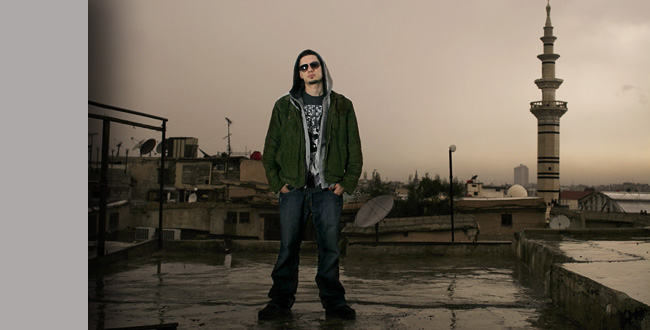 A number of Middle Eastern voices have started to make a name for themselves, releasing music that youth in the region can finally relate to, much of it influenced by the recent Arab uprisings. One of the artists at the forefront of this movement is Omar Offendum, who’s enjoyed a successful year of touring and recording.

Born in Saudi Arabia to Syrian parents, raised in the US, the rapper uses music to bridge his Middle Eastern roots to his Western upbringing. A graduate of the University of Virginia with a degree in architecture, Offendum continues to work while making music. There’s no manager, no PR: he runs his own social media, and handles his own shows.

Here’s what he had to say:

-For those who are not familiar with your music, tell us about how it all started.

“I listened to a lot of music growing up, but was also into Arabic culture and poets. I went to a Saudi school in the US, so we were taught the local curriculum, as well as the Saudi curriculum for Arabic and Islamic studies. We had to study Arabic poetry, something I became really fond of. Arabic lyricism in poetry draws parallel to that in hip-hop. But I really didn’t get into making music until I went to college. I started making beats, taking samples from the music my parents loved, then halfway into my college career, 9/11 happened, and all of a sudden there was a shift.

“I was no longer just another student on campus – I was a Muslim Arab on campus. It led to some interesting conversations, and some people on campus didn’t necessarily agree with what I stood for. I was against the war in Iraq and the war in Afghanistan. But it was a learning experience, and it was important for me to find my voice. Recently, it has been taking off. I have been doing this for 10 years -but I see those years as a period of laying the groundwork for what I am doing now.”

-Then you went online…

“Internet levelled the playing field for our generation; I don’t have a label, I don’t have a manager – I do it all on my own. Our generation is getting more savvy with that. My first video was made on zero budget. People are now able to produce professional things that are completely amateur. All my collaborations led up to me finally releasing my album SyrianamericanA. Since then, I’ve been performing across the region, as well as other regions.”

-How did the surname Offendum come about?

“I’m very into and influenced by pop culture. In my first album, there’s a lot of old movie sounds and things. The name Offendum means something so respectful on one side of the world [it means “Sir” in Arabic], while something so offensive on the other side of the world. Because people think it is a play on the words “offend them”. That in its itself is a perfect metaphor for what I do. Because it shows how certain things are interpreted in different parts of the world.”

-How has the Arab uprising affected your work?

“We released the track #Jan25, a collaboration with The Narcicyst, Freeway, Ayah and Amir Sulaiman. It was a song of solidarity – I do not claim to speak for people of the revolution. What we were doing were showing our support for people that use this medium. It has been a very busy year. When these things first started, I would have liked to think it wouldn’t make a difference, but I would be lying if I said that seeing that upon watching that first YouTube video of Syrian people chanting, it didn’t hit me.

“When it started reaching the area my father is from, it hit me even more. It’s terrifying and awe-inspiring at the same time. Change doesn’t come overnight; it will take time. We just have to remain positive and get through it, but I am also aware of there are plenty of opportunists out there. The future is in the youth’s hands – it has to work. It has definitely influenced my music, and it has influenced the world. Just look at Occupy Wall Street. But you can’t predict what’s going to happen, because nobody predicted this at the beginning of this year.

-What do you think about those artists that have spoken out for or against a regime in order to maintain or boost their popularity?

“There’s a lot of opportunists out there, whether politicians, religious leaders or terrorists and so on. I’ve been called an opportunist – I’ve had someone on YouTube saying that I am as bad as Bashar, and others have called me a traitor as I speak against the regime. I don’t respect that – that shouldn’t inspire your work as an artist. I have always tried to approach my music from personal experiences. The most important aspect of hip-hop music is that you have to keep it real.”

“Very recently there has been incredible stuff coming out from Beirut, Amman and Cairo. People are really starting to make the connection especially due to the uprising – hip-hop is very relevant. The quality of it is outstanding – people are no longer copying the West. Beirut has a long history of fusion, same as Cairo. MC Ameen is one of my favourite artists, as well as Arabian Knights from Egypt. Then there’s Fareed Al Atrash from Lebanon. One of my favourite artists from the UAE has to be Hamdan Al-Abri – he is so refreshing and incredibly talented. I am collaborating with him on my next album.”

-Recently Tamer Hosney caused uproar by releasing an English-language song with Shaggy, with critics branding him as an artist trying to hard to be something their not. What’s you take?

“It’s not the kind of music I listen to anyway, so I shouldn’t be an authority to speak on it. I think it is fine to branch out of your comfort zone if you are that type of artist, and you’re pushing boundaries. But is is completely different if you just think it’s going to work, but then it won’t work. People won’t buy into it. Music needs to come from an honest place. You look at some of these female artists on TV who are all made up and stuff, but I don’t know any of their names, and I don’t care. You have to get on YouTube to listen to amazing things.”

-Do you listen to any mainstream Arabic artists?

“I like Asalah. I like her stance and I like her work. I also appreciate Kathem El Saher and his use of poetry. I love Khaleji music – the rhythms, the sounds and the lyricism.”

-What’s next for you?

“Now I am working on my second album with Sami Matar. It will be out this year. Although I did say that the Street Called Straight video would be released in September and it only was released in January!”

-Finally, you made your career online. What’s your take on the sharing of music on their internet?
“The region has few outlets where you can purchase music. I have built my career on the basis of offering my music for free and people sharing it, then these people come to my shows. If I continue doing good shows, they’ll come out and support. I am happy to spread my music to those in the region!”

Omar is in Dubai this Wednesday 22 February to lead a one-off event at the Music Room that promises to bring together the creme de la creme of regional talent, including Jibberish, Rone Jaxx, Traknotz, Sain, Malikah, Jabbar and Ed Hooligan.

One Response to Omar Offendum: No Manager, No Label, Just Rap