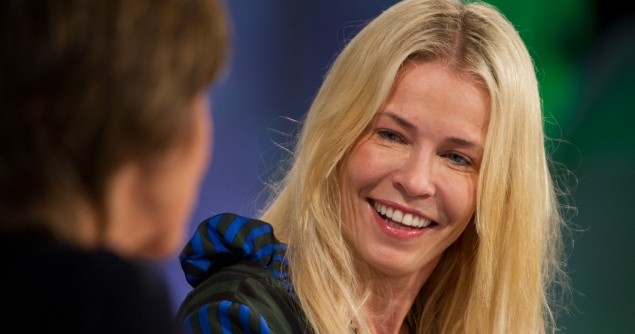 Saudi women expressed outrage at Chelsea Handler, the American host of the TV show “Chelsea Lately,” when she swore at Saudi men for being able to receive notification by SMS of their wives’ travels abroad.

The first woman quoted in the story says Handler does not understand how the system works:

Sabah Abdulmalik, a 42-year-old stay-at-home-mom said, “I would like to inform Chelsea that this is only a service that people can activate or decline and that this was not forced upon us,” said.

“This service was developed by the Saudi authorities and not by husbands who want to track their wives, so when she says such a word, she should know that it was not conceived of at a local level and that it’s a matter of choice,” she added.

It might be true that the SMS notifications are an optional service (although it is more complicated than that), but you are ignoring the elephant in the room: guardianship laws in Saudi Arabia do not allow women to leave the country without permission from their guardians. In the past it was the notorious yellow slip, now it is the infamous text messages.

Saudi fashion designer Reem AlKanhal says she respects freedom of speech but this crossed the line. “I think we have deeper problems than traveling, driving and covering our faces. They only focus on the aspects of our lives that make them laugh and we hate to be the butt of jokes on live television,” she said.

If we don’t want to be the butt of jokes then we should fix our “deeper problem.” Complaining about others laughing at us will not solve these problems, especially when we are not allowed to discuss and tackle them because of the red lines that you say Hanlder has crossed one of them.

A female Saudi blogger who chose to remain anonymous said that Chelsea’s clip was offensive not only to Saudi women, but to Islam as well. “We learned that Muslim women should not leave the house without the approval of their husbands and I think it’s the right thing to do,” she said.

“Her words were very aggressive and we do not accept such attacks, especially using bad words knowing that this is not how we were raised and this is not normal to us in Arab, local TV shows and talk shows,” she added.

You would think that bloggers are opinionated people who want to express their ideas and stand behind them, but this is not the case here. Here, you have a blogger who wants to be anonymous. She is like the anti-blogger. She complains that Handler, a comedienne who was talking on a late night show, used “bad words.” What are you, five? She adds that “this is not normal to us in Arab, local TV shows and talk shows.” First, this was not an Arab or local show. Second, you almost certainly watched this on YouTube, i.e. you chose to click and watch this. Nobody forced you to do this. Oh and by the way, since you seem easily offended, you should probably stop using the Internet.

Sarah Essam, a 32-year-old mother of two, wonders how Chelsea thought she was defending Saudi women in making these statements. “I know that using shocking language and discussing controversial topics are surefire ways to attract a larger audience, but this is beyond disrespectful and she crossed the line,” she said.

“Thanks to her words, she actually made us defend our husbands and stand behind this service even if we don’t approve of it,” she added.

Again with the damn line. But wait, Handler’s comments made you “stand behind this service even if we don’t approve of it”? Wow, talk about Stockholm Syndrome.

Mariam Hejazi, a 28-year-old banker, demanded an apology from Chelsea. “We have been tolerating the international media for a really long time. How can they judge a whole nation when funnily enough, it is their motto to “never judge a book by its cover,” she said.

Poor Hejazi is upset. Very upset. How dare this Handler comedienne make fun of her plight? How insensitive of her. Okay, khalas, international media will no longer talk about Saudi women issues because someone’s feelings are hurt. Promise. Pinky promise.

In the end, the newspaper has managed to find at least one woman who was not offended by the clip:

Yasmine Abdulrazak, an English teacher at a college in Jeddah, thinks the clip was actually funny and did not feel offended by it. “I don’t know why we are always offended when people talk about us. Yes, the media highlights the negative things about Saudi Arabia and they always make women feel like we need a hero to save us,” she said.

“Chelsea is a comedian and her job is to mock people and attack others to make her audience laugh. We see her make fun of celebrities, politicians and nations but they do not express offense in the same way we did today,” she added.

I found a few more on Twitter. Here’s one of them:

Apparently, I was the only one who wasn’t the least bit offended by @chelseahandler. Saudi women outraged at TV host arabnews.com/saudi-arabia/s…