Look out for Mohamed Salem, because chances are you’re going to hear a lot more about him in the coming year. One of the first stand-up comedians to emerge from Egypt, the 30-year-old Alexandria native has caught the attention of social network users thanks to his show Moga Stand-up, not to mention a few celebrity fans (word has it Egyptian actresses Basma and Donia Sameer Ghanem are just two of the big names who have attended his gigs in the past). 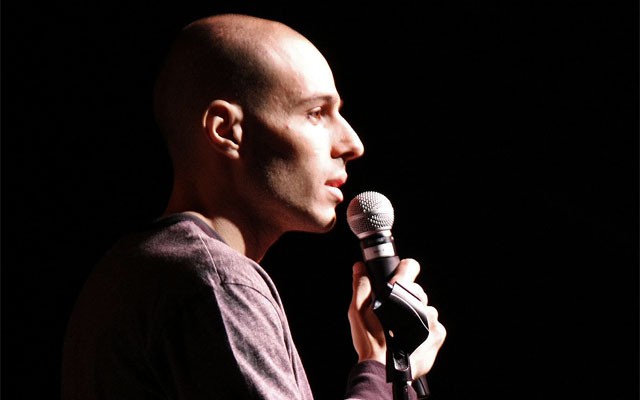 Want to know what all the fuss is about? During a reason visit to Dubai (where he was performing at Comedia 3al Wagef in Dubai Marina), we met Salem for a quick chat.

How long have you been doing stand-up?
Six years now. I was one of the first people to do it in Egypt. At the time, there wasn’t really a scene to be honest. I’ve appeared in six countries so far, including Jordan, Bahrain and even the United States.

How did you get into it?
I’ve always been into entertaining my friends and making them laugh, until one of my close friends told me that what I am doing is stand-up. I started out doing shows in Alexandria, then Cairo, followed by an appearance in Jordan.

What do you centre your comedy around?
When I am in Egypt, it’s related to Egyptians. However, when I am abroad, I mix it up a little. International topics, like Facebook, Twitter or any Arabic films or music. I keep it clean; I don’t like using political, sexual or religious topics. I don’t want to divide people. I want people to unite over my show – observational clean comedy.

What do you make of the current stand-up comedy scene in the region?
It has become bigger than before. People didn’t know what stand-up comedy meant. Then I did Moga Stand-up in 2010 with two more comedians, as well as some newcomers who had never been on stage before. At the time of it being filmed, there was not a boom in social media like now, after the revolution. But people really started noticing in the past few years. I want to see the rise of comedy clubs in the region – done properly where crowds have a genuine interest in attending.

What do you make of comedians using Western formats, such as Bassem Youssef acknowledging his show is the same format of John Stewart’s?
Artistically, everyone does something to suit their interests. I am political and have political opinions; however, I keep this to myself. I can watch it, but I wouldn’t do it myself. He took advantage of the fact that no one had taken that formula or used it, and he decided to use it, and it works. The same idea could go to stand-up comedy – it’s initially a Western idea. The only thing I oppose is using the same jokes.

Where do you want to see stand-up headed?
I would really like the scene to receive more support, by which I mean more financial support from brands and sponsors in order to create more shows. At the moment, brands are worried about their image, or that it would get affected by what’s being said by a comedian they support. For example, what if they’re supporting someone else who is a VIP or politician or famous person, for example, and then they’re also supporting a comedian that slags off these certain people in his segment? I don’t think its common, and comedians understand the business, so it is an unnecessary fear as such. I wish brands can come and watch and see what it is all about. The scene needs more support in order to reach more people.

Do you see yourself getting into acting in the future?
I just want to do stand-up comedy. I did some acting workshops in Egypt; however, comedy is what I want to do for the coming years.