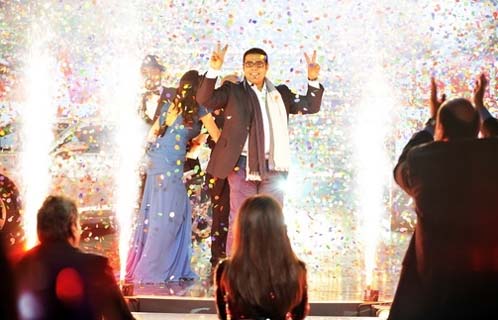 Following months of auditions, and surviving multiple elimination rounds, Amr Qattamesh emerged as the winner of the region’s very first Arabs’ Got Talent.

The Egyptian poet, whose unique approach to Arabic poetry won the hearts of millions of viewers across the region, beat eleven other finalists to win 500,000 Saudi Riyals, a brand new car, as well as a contract with MBC.

Being part Egyptian, I’m quite happy to reveal that I was the first UAE-based writer to secure an interview with the performer. Here’s what he had to say.

How are you feeling? It must have been an intense week for you prior to the show.

I am feeling great. Despite the fact I have been talking to so many journalists, I am not tired or anything. Really enjoying it.

And of course, congratulations on winning Arabs’ Got Talent

Thank you. I am very excited to have won the show, and what you know what I loved the most? The fact that the whole Arab world was happy that I won. For example, in Beirut [where the programme is filmed], I had Lebanese people in the street tell me that they voted for me. The feedback online has been great as well.

You’re an online hit as well. Your semi-final and final videos have been circulating heavily on Facebook.

All I can say is that I thank Allah for providing me with this opportunity. You know, I swear it is not about the money or the prizes for me. It is about having the opportunity to share my voice with millions of others.

I honestly feel that Allah gave me these two-and-a-half minutes per show to share my message with viewers, which is why I took it very seriously. This is an opportunity that will not come very often.

The judges were fans as well, especially Amr Adeeb.

It was an honour to have the support of the judges, but let me tell you something, Amr Adeeb did not support me because we were both from Egypt, because at the end of the day, Amr also rejected a lot of Egyptian contestants in the audition round. It is not about nationality, but in the end, near the finals, he really started to warm to my work.

The competition must have been tough at some points, considering the recent violence that has been occurring in Tahrir square.

Yes, and I actually changed my material at the last minute for the semi-final and final show, because of the constant changes occurring. Thankfully, the Arabs’ Got Talent producers were supportive of this.

It was hard, because I was one of those who were camping out in Tahrir Square in January and February until the regime was overthrown. I lived the protests, and I am sad about what is happening right now.

We are like one big family, and even though I am back in Cairo now, we are all in touch, and will remain in touch.

If you were not one of the finalists, who would you have voted for?

I cannot choose one, because they are all my friends, all so very talented, and all deserve to be in the final. They are the best talent the Arab world has to offer.

And what are your plans now?

I would like to continue what I am doing, and perhaps tour so I can continue to spread my message to others.

Finally, what do you want to see happen to your home country?

I have no preference when it comes to the future president. I just have one dream that the whole of Egypt becomes like the community that was witnessed in January and February in Tahrir Square.