“I Eat Kids”: The Meaty Delights of Dubai’s Asado 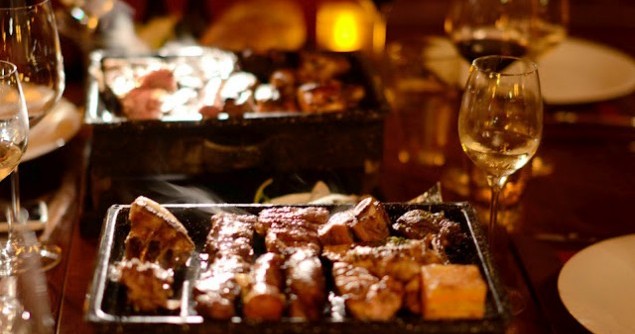 Very funny, no? But true. Last night I ate kid. Not a whole one – just a couple of ribs. The meat was a little sparse, but it was tender, dripping with puppy fat and buttery juices. I threw it back while gulping on berry-rich Malbec and listening to salsa. I licked my fingers, and I rubbed the plate clean with bread, sopping up every last morsel. I suppose, that to vegetarians, it doesn’t matter that it wasn’t a human child – it’s barbaric none the less. But baby goat, or Chivito, is one of the dishes you must try in my new favourite meat temple, Asado. If you can stomach it, I suppose.

There’s no hiding from roasted flesh in this cavernous carnivorous corral. The entire space is coloured like the belly of a beast – dim, brown, red, black. Chandeliers are constructed of antlers, a homage to death. Warmth surrounds like blood, columns rank the walls like ribs, and a mighty mirror shines at the end like a gaping mouth. The kitchen sheds the only bright light, which falls on the centrepice – not flowers, water feature, or other sweet or inane decor, but an altar of sacrifice – carcases of baby goats splayed and roasting over coals. They reside behind glass – probably to stop greedy fingers, but their aroma permiates the room, had us hungering for blood before we even saw the menu.

There are other dishes – Provolata and other cheeses, empanada, salads and soups. But they were passed over for the flesh. Maybe it was the lusty background music – quivering guitar accompanied by a throaty voice from a petite and fedora-hatted alto, or maybe just the sights and smells. I felt all hot-blooded and medieval. I hungered. I wanted to suck the meat from bones and throw them over my shoulder and demand more.

All thoughts of abstinence or even moderation flooded me, and I found myself ordering pieces of everything, asking them all to arrive, smoking on a grill at the table, so I could try all the different cuts of meat along-side. Weigh them against each other for texture, tenderness, density and richness. The waiter simply smiled, and suggested a selection for the table – perchance he has seen this bourgeois blood-lust before?

I attacked the wine list with similar gusto. It’s a paragon of Latin American vinosity. Unusual and exciting wines I have not seen anywhere else in the city. The sommelier arranges specific shipments it seems, and each one particular to Asado has a bunch of grapes stamped alongside. Fortunately I have tried a couple already at the wine tasting – a very reasonable bubbly by Michel Torino and an incredibly vibrant and youthful unwooded Malbec from Ique. I hover between an Argentinian Torrontes and an Albarino from Uruguay, and I am steered the less risky rout towards Argentina’s rival to gewurztraminer, Torrontes. Of course, Malbec follows – this time a little more serious, aged and oaky, but still with that blackberry fruit and velvety plushness that accompanies fatty and salty char-grilled meat so well.  Malbec is only a piece of a red wine puzzle in other parts of the world, in particular, one of the big five that make up Bordeaux reds, but in Argentina a most singular varietal – probably of a different (and maybe even superior) clone, it is thought.

Meat arrived both with simplicity and splendour upon a firy grill, sizzling and spitting as the juices dripped. We fought for the choice cuts – the goat was first to go – pale ribs arced and delicate, with tiny strips of soft ripe meat between that could not be discovered via cutlery. Fingers were dirtied, and I got my medieval fix. The tenderloin was quartered sparingly, delivered red and oozing to each plate by my careful husband, but the rest was a free-for-all. Veal and lamb cutlet, beef short ribs, chicken skewers and brisket dissapeared in a flurry, and five minutes later all that could be seen were the silent and sated grins of greedy gluttons as we sat back and sighed into a more appropriate reclining position to enjoy the rest of the evening with our ears and eyes.

I’m told they do desserts at Asado – but savoury flavours held my tongue, and only cheese seemed appropriate, particularly as at this point the accompanying beverage was firmly a gutsy red. It’s also possible that there were sides ordered, but I can’t remember them. Translated, asado means to roast, and is also the colloquial word for barbecue – Asado needs no more recommendation. The meat is GOOD. (Especially the little kids)

One Response to “I Eat Kids”: The Meaty Delights of Dubai’s Asado