How a Singing Competition Changes Perceptions 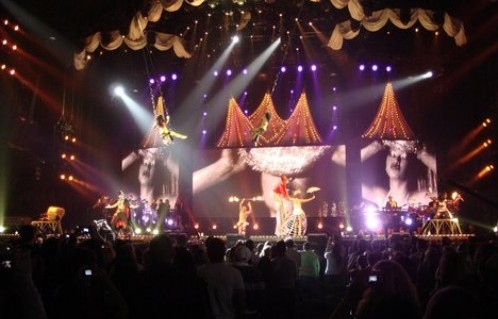 “Are you crazy? Isn’t it dangerous?” This was the reaction I received from most people when I said I was heading to Bethlehem one evening to meet and interview the talented young singers behind the wildly popular Palestinian reality television show New Star.

Similar in format to American Idol, New Star is a novel concept for Palestinians, allowing the younger, more secular generation to showcase its talents and uniting a people dispersed across the West Bank, Gaza, Israel and beyond. Beamed by satellite to numerous countries in the region, New Star is fast becoming an Arab cultural sensation.

As a journalist I had no doubt this story had to be told but, at the same time, as a Jew and an Israeli citizen, I realised that travelling to a city under Palestinian control, late at night and alone, did seem “a little crazy.”

The evening before the assignment, I agonised long and hard. I considered where I was headed: the new Palestinian Convention Center in Kfar al-Khadar, south of Bethlehem, where the show is broadcast live each week. It is only 27 kilometres from my home and on the outskirts of Jerusalem. But the thought of passing beyond the Israeli checkpoint to a lonely stretch of dark highway and into Palestinian territory unnerved me. Four Israelis, including a pregnant woman, were murdered by extremists on that road just last summer.

As I deliberated, my journalist voice spoke out. I decided that in order to tell the most powerful stories reporters have to take chances. This, I felt, would offer an inspirational insight, not only into the glamour of a ritzy singing competition reflecting the softer side of a population often seen either as warriors or victims but also because, in essence, it shows how people of all faiths and nationalities can come together even in a region dogged by conflict.

The show also exemplifies some of the physical and philosophical complexities here, such as the one finalist from Gaza forced to perform via satellite link and the Arab Israelis now boldly identifying themselves as Palestinians.

Behind the scenes too, the mix of people is symptomatic of a region where nothing is black and white. Produced by the Palestinian news agency Ma’an together with Mix TV, a Haifa-based company owned by two Arab-Israeli brothers, the staff is an amicable mix of Palestinians, Palestinian Israelis and Israeli Jews, who view the project only through professional eyes.

Thanks to the encouragement of a friend from Ma’an, I felt more at ease about heading off to write from the other side of the conflict. We met after I’d passed through the Israeli checkpoint and he guided me through the Palestinian one. He also dealt with the Palestinian policeman and saw me safely inside.

As I followed the throngs of fans into the auditorium, I felt as though I could have been going to a show anywhere in the world. Dressed in their best outfits, the scene was a far cry from the usual image Israelis have of Palestinians, which is either as manual labourers or aggressive warriors. Clutching their oversized banners depicting their favourite singers, the excitement in the hall was palpable.

Behind the scenes, this week’s group – 12 out of the remaining 24, down from the thousands that had auditioned – sat patiently waiting for the show to begin. Their excited chatter was surely reminiscent of backstage banter at any such show.

As I chatted with 21-year-old contestant Waheed Yaseen, from a small Galilee village, I knew that my decision to come had been right. “We have no programme like this in our community,” he told me in fluent Hebrew. “There is A Star is Born but that’s in Hebrew. I like to sing in my mother tongue, Arabic.”

I asked Yaseen how he was feeling before heading off to vie for a place in the final and hopefully win the coveted prize of stardom. “I’m nervous but I feel confident at the same time,” he laughed, adding, “I don’t know how I can feel those two things at the same time, but I do.”

I looked around at the mix of people and thought back to my own journey here, to a region where a 20-minute drive can take you into another world with different religions and language. Yet at the same time, many of the same nuances make that culture as familiar as your own.