Enchanting Mirbat: A Paradise to be Lost 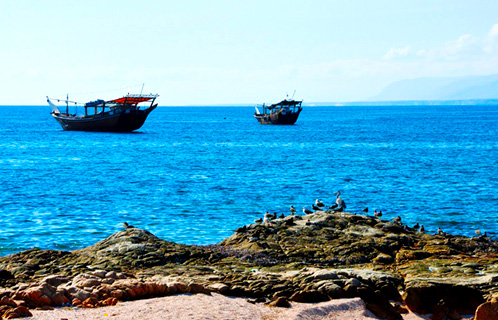 A couple of weeks ago a seminar titled ‘Mirbat Throughout History’ was held at Marriott Resort just outside of the town of Mirbat in Dhofar. The town and its surrounding valleys and villages can almost be referred to as Dhofar’s forgotten treasure. I’m pleased the seminar took place, though I don’t feel it received nearly enough media attention. None of my colleagues had even heard about it. I would have gone, but the town lies 80km east of Salalah and I wasn’t able to get time off work.

Mirbat has intrigued me and thousands of others I’m sure over the years. With its rich history, hidden mysteries and diverse geography, it deserves more attention than it actually gets. The wilayat of Mirbat is a haven for explorers, campers, hikers, fishermen, and divers. It is home to some of the most beautiful unspoiled white-sand beaches in the country and the bays are home to an incredible variety of marine life.

The caves of Mirbat with their pre-Islamic writings are fascinating and the Tawi Attir sinkhole and bird sanctuary which lies deep in the mountains behind the town is 112m deep and was featured a few years ago in National Geographic magazine. Every month during the full moon, hundreds of locals from Salalah head to Mirbat to camp on the beaches and enjoy the timeless feeling of the area.

The pre-Islamic archaeological site of Sumhuram (Khor Ruri) west of the town of Mirbat dates back to 4000BC. Inscriptions rec-ord that it was established by LL’ad Yalut to control the Dhofari frankincense trade. According to history, Indian seamen who brought cotton cloth, corn, and oil in exchange for incense over winter, waited for the favourable monsoon winds to take them home. The site has been open to the public for a few years and as of this year has its own little museum. On site are two temples and several locations where you can see ancient inscriptions in a language that appears to have branched from the Proto-Sinaitic alphabet in the ninth century BC.

In addition to frankincense trees, the mountains behind Mirbat gravity point are also home to a mysterious valley of rare and ancient baobab trees. Some baobabs are reputed to be many thousands of years old, which is difficult to verify, as the wood does not produce annual growth rings.

While driving through the mountains you are likely to come across camels, mountain goats, deer, wolves, and even the occasional hyena or two. I’ve seen strange creatures in those mountains that I have yet to identify.

The actual town of Mirbat is home to many crumbling yet still-inhabited buildings and old abandoned Yemeni-style mud-brick structures. 14th century traveller Ibn Battuta spoke of the town of Al Baleed being famous for the export of horses to India though in fact the horses were exported from Mirbat.

Bedouins brought their beautiful Arabian horses overland on ancient trade routes through the Empty Quarter to the coast. A statue of an Arab horse at full gallop is placed on each side of the road at the entrance to the town to commemorate its past. The word ‘Mirbat’ in Arabic means the place where horses are tethered.

The Battle of Mirbat – which took place in the monsoon of 1972 – was the beginning of the end of the Dhofar Rebellion. If you’re interested in more details, the battle has its own page on Wikipedia. According to historical texts, the town of Mirbat was also the first Islamic capital in Dhofar.

You can still find old Islamic graveyards on the outskirts of the town and shrines belonging to Islamic scholars from hundreds of years ago. Believe it or not, these shrines draw religious worshippers of different nationalities on a regular basis. I’ve always found grave ceremonies and sacrifices a little unsettling. If you’ve been to the tombs of Job or Bin Ali (both in Dhofar) on a Friday morning before prayers, you’ll know why!

Mirbat may seem like a magical timeless place right now, but don’t be fooled. The area as we know it is coming to an end. If you’ve been to the elegant Marriott Hotel just outside of the town of Mirbat, a quick scan of the humungous model in the middle of the lobby will give you goose bumps. The future of Mirbat lies in that plastic model. An RO1bn project covering 2mn sq m. The project includes hundreds of expensive villas, pools, five-star hotels, theme parks, clubs and a golf course. That is the future of Mirbat.

I have mixed feelings about westernised tourist resorts, especially when they land on a place as beautiful as Mirbat. Such developments may be catastrophic to the area. We’ve also been hearing rumours of a possible navy dock. Yet another project to take over what’s left of Dhofar’s natural beaches.

Since Oman is working so hard to promote tourism it seems totally insane to destroy the very things that make the country so beautiful and attractive. What Mirbat needs is a decent museum, a renovated souq, clear exploration paths and a little cultural regeneration … not a nine-hole golf course!

If you plan to visit Salalah, take the time out to drive to Mirbat. Take a walk through the old houses and marina, and up to Mirbat Fort. Sit on the beautiful smooth rocks by the water with the seagulls and admire the clear blue ocean and the wooden dhows moored in the Arabian Sea. Try to capture the essence of this beautiful old town as we know it, for the winds of change are blowing our way!