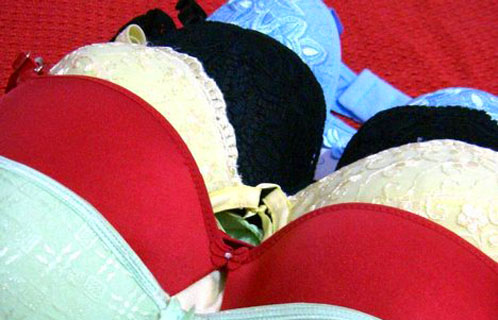 Arab News runs a piece noting that both men and women prefer to have women selling lingerie, but somehow the stars don’t correctly align to permit it.  Salesmen feel ‘awkward’ to be selling intimate apparel to women; women don’t want to discuss their bodies in front of strange men. The natural conclusion to reach is that women should be the ones selling lingerie to women, but things aren’t that simple. It’s Saudi Arabia, we’re talking about, so what, really, is simple?

The Saudi societal aversion to having men and women in the same place is the real problem. Government regulation to keep men and women separate leads to additional expenses that make hiring women unprofitable. Unlike other shops, a female-staffed lingerie shop would require blacking out of windows, hiring guards for the doors, and numerous other add-ons. No business owner willingly accepts rules that turn a potential profit into an assured loss.

DAMMAM: Most young Saudi women are hesitant to work at women-only clothes shops at a time when many of their counterparts can be seen in security staff and supervisor uniforms at commercial complexes where men are also allowed to shop.

Most lingerie shops are staffed by men, largely foreigners. Even after some women activists launched a campaign to boycott such shops a few months ago, only a small number of Saudi women came forward to work as sales staff at these outlets.

There are young Saudi women working as security staff and supervisors at almost all the commercial complexes opened in the recent past. Wearing uniforms, they watch the shoppers coming in and going out of showrooms and sell not only women’s garments but also that of men and children.