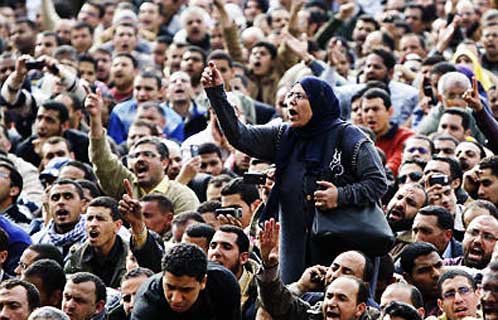 I know that I have not written that post about Tuesday #Feb 2 Protest at Tahrir which was so great but I will write you about the Departure Friday protest at Tahrir today.

First of all I came bit late at 2 PM as my aunt wanted to come with me. Second it was considerably more crowded, third there were lots of committees made of wonderful volunteers to investigate everybody after what happened last Wednesday.

It was bigger than last time and much better organized.  People from all backgrounds, classes, ethnicities,  religions and political views were and are there, not only the Muslim Brotherhood (MB) as claimed in Egypt’s mainstream media.

The spirit was cheerful, the morale high. People were and are holding Egyptian flags. The street sellers were back and found a golden opportunity, of course they were more patriotic and sold the flags for prices less than during the football match…

Patriotic songs were being sung all over the place, old songs of Halim and Sheikh Emam. Political activist and singer Azza Balba’a sang Sheikh Emam’s songs for a group of non socialist youth who repeated after her the words.  There are wonderful teams of doctors in Tahrir who volunteered to help their follow Egyptians in the field , also there are wonderful people who bring medical supplies and food to the people. I saw many of the wounded protesters and I feel so angry for them, and those killed since January 25, 2011.

While I was there , there was an announcement that our people in Al Arish were having huge protests there and that they had gained control over the Al Arish. Also I heard that the people in Mahalla managed to bring in the thugs to their side. The Alexandria protest was now a two million man protest.

Here is the first patch of videos which I am uploading now , more photos and videos coming the way :

The departure Friday : Part of Tamim El-Barghouti’s poem about the Egyptian revolution

The departure Friday : Even the youngest are against Mubarak

The Muslims and Christians prayed side by side today in the square and the Christians protected their follow Muslims during the prayers.

While I was leaving , I found Hamdy Khalifa , the head of the Bar Association known for his connection to the regime heading to the square,  I thought it was nice of him. When I returned back home, my mom told me that he came on TV and said that today’s protest was only couple of thousands in Tahrir. This is even before heading there. I hope that the people did not welcome him.

The people do not demand only that Mubarak step down, but also that they prosecute him for what he has done so far in Egypt.

The pro-Mubarak supporters were outside trying to scare people and to convince the people going to the protest that it was bad, but they have failed so far. There were very few foreigners in the square unlike last time thanks to the witch hunt launched in our media.

It was fine great day for Egypt , I want the people to continue in Al Tahrir and outside Cairo because they are standing for the whole country – even those who are attacking them blindly thanks to the regime controlled media.