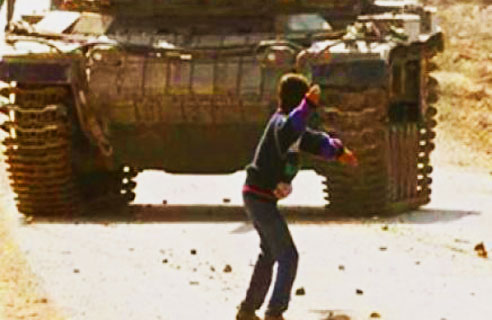 Israeli police have been criticised over their treatment of hundreds of Palestinian children, some as young as seven, arrested and interrogated on suspicion of stone-throwing in East Jerusalem.

In the past year, criminal investigations have been opened against more than 1,200 Palestinian minors in Jerusalem on stone-throwing charges, according to police statistics gathered by the Association of Civil Rights in Israel (ACRI). That was nearly twice the number of children arrested last year in the much larger Palestinian territory of the West Bank.

Most of the arrests have occurred in the Silwan district, close to Jerusalem’s Old City, where 350 extremist Jewish settlers have set up several heavily guarded illegal enclaves among 50,000 Palestinian residents.

Late last month, in a sign of growing anger at the arrests, a large crowd in Silwan was reported to have prevented police from arresting Adam Rishek, a seven-year-old accused of stone-throwing. His parents later filed a complaint claiming he had been beaten by the officers.

Tensions between residents and settlers have been rising steadily since the Jerusalem municipality unveiled a plan in February to demolish dozens of Palestinian homes in the Bustan neighbourhood to expand a Biblically-themed archeological park run by Elad, a settler organisation.

The plan is currently on hold following US pressure on Benjamin Netanyahu, the Israeli prime minister.

Fakhri Abu Diab, a local community leader, warned that the regular clashes between Silwan’s youths and the settlers, termed a “stone intifada” by some, could trigger a full-blown Palestinian uprising.

“Our children are being sacrificed for the sake of the settlers’ goal to take over our community,” he said.

In a recent report, entitled Unsafe Space, ACRI concluded that, in the purge on stone-throwing, the police were riding roughshod over children’s legal rights and leaving many minors with profound emotional traumas.

Testimonies collected by the rights groups reveal a pattern of children being arrested in late-night raids, handcuffed and interrogated for hours without either a parent or lawyer being present. In many cases, the children have reported physical violence or threats. 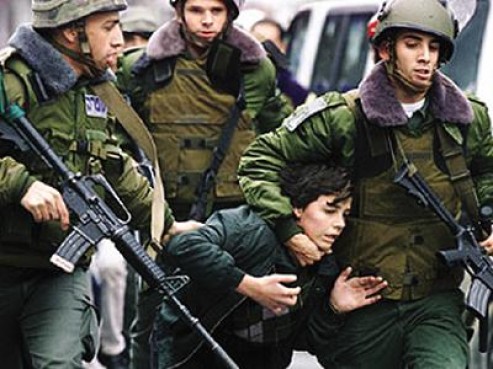 “Particularly troubling,” they wrote, “are testimonies of children under the age of 12, the minimal age set by the law for criminal liability, who were taken in for questioning, and who were not spared rough and abusive interrogation.”

Unlike in the West Bank, which is governed by military law, children in East Jerusalem suspected of stone-throwing are supposed to be dealt with according to Israeli criminal law.

Israel annexed East Jerusalem following the Six-Day war of 1967, in violation of international law, and its 250,000 Palestinian inhabitants are treated as permanent Israeli residents.

Minors, defined as anyone under 18, should be questioned by specially trained officers and only during daylight hours. The children must be able to consult with a lawyer and a parent should be present.

Ronit Sela, a spokeswoman for the Association of Civil Rights in Israel (ACRI), said her organisation had been “shocked” at the large number of children arrested in East Jerusalem in recent months, often by units of undercover policemen.

“We have heard many testimonies from children who describe terrifying experiences of violence during both their arrest and their later interrogation.”

Muslim, 10, lives in the Bustan neighbourhood and in a house that Israeli authorities have ordered demolished. His case was included in the ACRI report, and in an interview he said he had been arrested four times this year, even though he was under the age of criminal responsibility. On the last occasion, in October, he was grabbed from the street by three plain-clothes policemen who jumped out a van.

“One of the men grabbed me from behind and started choking me. The second grabbed my shirt and tore it from the back, and the third twisted my hands behind my back and tied them with plastic cords. ‘Who threw stones?’ one of them asked me. ‘I don’t know,’ I said. He started hitting me on the head and I shouted in pain.”

Muslim was taken into custody and released six hours later. A local doctor reported that the boy had bleeding wounds to his knees and swelling on several parts of his body.

Muslim’s father, who has two sons in prison, said the boy was waking with nightmares and could no longer concentrate on his school studies. “He has been devastated by this.”

Ms Sela said arrests had risen sharply in Silwan since September, when a private security guard at a settler compound shot dead a Palestinian man, Samer Sirhan, and injured two others.

Clashes between the settlers and Silwan youths came to prominence in October when David Beeri, director of settler organisation Elad, was shown on camera driving into two boys as they threw stones at his car.

One, Amran Mansour, 12, who was thrown over the bonnet of Mr Beeri’s car, was arrested shortly afterwards in a late-night raid on his family’s home.

Also in October, nine rightwing Israeli MPs complained after stones were thrown at their minibus as they paid a solidarity visit to Beit Yonatan, a large settler-controlled house in Silwan. Israel’s courts have ordered that the house be demolished, but Jerusalem’s mayor, Nir Barkat, has refused to enforce the order.

In the wake of the attack, Yitzhak Aharonovitch, the public security minister, warned: “We will stop the stone-throwing through the use of covert and overt force, and bring back quiet.”

Last month police announced that house arrests would be used against children more regularly and financial penalties of up to $1,400 would be imposed on parents.

B’Tselem, an Israeli human rights group, reported the case of “A.S.”, a 12-year-old taken for interrogation following an arrest at 3am.

“I sat on my knees facing the wall. Every time I moved, a man in civilian clothes hit me with his hand on my neck … The man asked me to prostrate myself on the floor and ask his forgiveness, but I refused and told him that I do not bow to anyone but Allah. All the while, I felt intense pain in my feet and legs. I felt intense fear and I started shaking.”

In a statement B’Tselem said: “It is hard to believe that the security forces would have acted similarly against Jewish minors.”

Micky Rosenfeld, a police spokesman, denied that the police had violated the children’s rights. He added: “It is the responsibility of parents to stop this criminal behaviour by their children.”

Jawad Siyam, a local community activist in Silwan, said the goal of the arrests and the increased settler activity was to “make life unbearable and push us out of the area”.

The 60 experts who wrote to Mr Netanyahu warned that the children’s abuse led to “post-traumatic stress disorders, such as nightmares, insomnia, bed-wetting, and constant fear of policemen and soldiers”. They also noted that children under extended house arrest were being denied the right to schooling.

Last year the United Nations Committee Against Torture expressed “deep concern” at Israel’s treatment of Palestinian minors, saying Israel was breaking the UN Convention on the Rights of Children, which it has signed.

Over the past 12 months, Defence for Children International has provided the UN with details of more than 100 children who claim they were physically or psychologically abused while in military custody.

A shorter version of this story first appeared in the National newspaper.