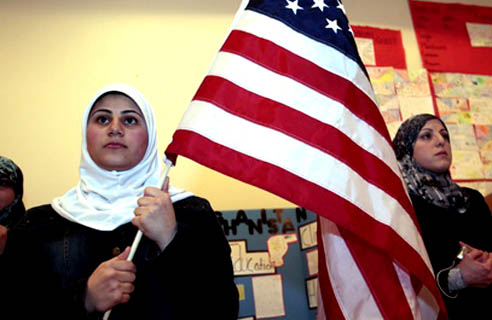 At first glance, the headlines covering this week’s Gallup report on the state of Muslim Americans, were pleasing. “Muslims are loyal to the US,” reported The New York Times. “Muslims condemn attacking civilians,” said the United Press International news agency.

Here was clear evidence challenging those who perpetuate fear and prejudice by claiming that Muslims are some kind of fifth column.

In between the implied surprise of the headlines, the media coverage gave us snippets of new and fresh information. I wanted to know more. Despite the financial crisis and campaigns such as that against the so-called Ground Zero mosque and real attacks on Muslim places of worship, Muslim Americans are feeling optimistic. Since the last iteration of this report, the feeling among younger Muslim Americans that they are thriving rose to 65 per cent from 40 per cent. Jewish Americans are most likely to have the greatest empathy with Muslim Americans.

Yet, instead of columnists trying to make sense of such intriguing phenomena, it was Muslim loyalty, tolerance and opposition to violence and terrorism that were seen as news.

This, despite the fact that these same results keep being found, keep being published – and keep being greeted with surprise.

In 2006, CNN-IBN-Hindustan Times conducted a survey of 29 Indian states, and concluded that Muslims suffered under a “myth of extra-territorial loyalty”, pointing to the fact that all but two per cent of Muslims said they were “proud” or “very proud” of being Indian. Levels of pride in being Indian were at almost identical levels between Hindus and Muslims.

In 2009, the Co-exist Index published by the Coexist Foundation in conjunction with Gallup found that European Muslims show as much or more loyalty to their country as the wider public.

But the myths persist.

According to Europol’s EU Terrorism Situation and Trend Report, out of 249 terrorist attacks carried out in the EU in 2010, only three were related to Islamist terrorist groups.

A January report on terrorism statistics based on publicly available data from bodies such as the FBI and other US crime agencies concluded that terrorism by Muslim Americans has accounted for a minority of terrorist plots since September 11.

The latest report’s findings are great news in terms of adding to the growing mountain of evidence that, like other right-minded human beings, Muslims oppose violence, are as tolerant – and often more tolerant – than their peers and are deeply loyal to their countries.

These facts must stop being such a surprise. But can the minds of those who uphold the myths in spite of the evidence be changed? If so, that would be a surprise I would greet with as many exclamation marks as I could muster.

This is my weekly column published yesterday in The National newspaper. It refers to a poll released by Gallup this week about Muslim Americans.