Can love be measured? Do we want it to be? 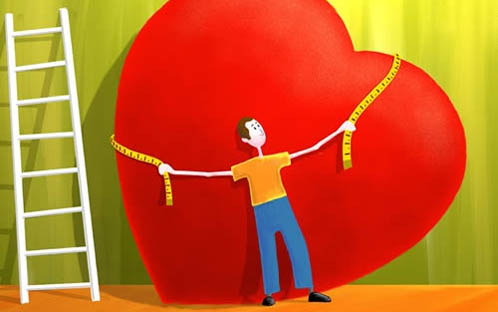 This week, the UK’s prime minister announced the commissioning of a regular “happiness index” of the British population. France, we know, intends to include happiness in its measurement of economic progress and Canadian statisticians already poll wellbeing across the country, though not for official data.

Since an agreed-upon definition of happiness has eluded philosophers and scholars for thousands of years, how on earth can it be indexed or measured?

More intriguing for me, as a writer about love, is whether such an index would measure subjective experiences of romantic, familial and parental love. After all, love is supposed to make us feel happier and more contented. If we have more love, then we should be happier, right?

I don’t know how measuring happiness, let alone love, would work. Love has a certain delicious vagueness about it. For example, when single men and women on the cusp of marriage ask married counterparts how they can ascertain if their intended partner is “The One”, the response is suitably enigmatic: “You just know”.

When it comes to love we accept this lack of clarity as part of its allure, as if knowing its construction would diminish from its magic.

The married will advise that mapping the seemingly daily fluctuations in love-weather are even more elusive. In such cases, the ability to measure love might be helpful if only to create a “Love-ometer” to hang by the front door to warn of the love climate indoors.

Certain activities enhance love for sure – showing concern, helping with chores, making romantic gestures. However, these activities are not a guaranteed recipe to send the Love-ometer mercury upwards. If only love were as exact as stirring together one part housework, one part compliments, one part romance and two parts listening. Instead, love seems to be more like a casserole: you keep putting in all the ingredients, and you hope a tasty love will come out of it. But nothing is for sure.

Despite my reservations about destroying its enigmatic qualities, I must ask if love can be enhanced by science.

A study published last month by Stephanie Ortigue, a neuroscientist at Syracuse University in New York state, set out to give some definition and measurement to love. “Love is one of the most important concepts in life. It is not well understood. As a scientist I wanted to bring some rationality to the irrational, and to see if love exists in the brain.” Her conclusion is that it does – in 12 parts of it.

Her findings suggest that not only does love feel good and possibly lessen pain, it also encourages people to continue to forge a bond – partly because they are “chasing the high” of the love-soaked brain. Additionally, the higher areas of the brain are activated to reinforce the fact that love is more than a basic emotion: it involves cognition and complex functions including goal-directed motivation, reward and self-representation.

It’s interesting stuff about the nuts and bolts of love, but for the romantics among us who believe in the intangibility of love and that “love conquers all”, does this really matter?

Ortigue says it does. By knowing which parts of the brain love triggers, she wants to use her results to help those in relationships to better manage them, and those who are depressed or suffering other negative outcomes as a result of relationship break-up to get through their dark times more effectively.

My negativity towards mixing love and science may therefore prove unfounded. Instead of sucking the magic out of love, having science as another way of understanding its mechanism could actually help us improve both the quality and quantity of love that we experience. And if the happiness index can measure that, I’m all for it.