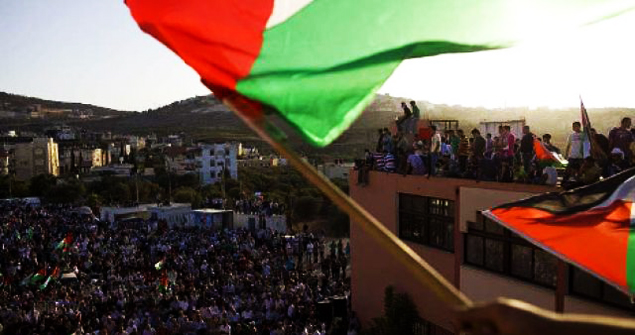 Volunteer Nasim Awadallah’s eyes light up when he begins talking about the soccer team he created and now coaches in his small village of Ein Nekuba, just outside Jerusalem. Each morning, he says enthusiastically, he helps teach sports at the local elementary school and later takes the most eager students out for soccer training.

“When I was young someone came to the village to teach me how to play football [soccer] and now I want to teach others”, states the 19-year-old volunteer, adding, “When I see the children each morning, I know I am really helping them.”

Awadallah, whose volunteer work was set up through a government-sponsored civilian service programme, is one of a growing number of young Arab Israelis choosing to give back to society specifically through the initiative. Yet the programme – which is largely seen as an alternative to compulsory military service – presents a complex dilemma for Israel’s 1.5 million Arabs, who often feel discriminated against by the government and mainstream Israeli society.

“I understand why Arabs believe that [joining] the army is a bad thing but I can’t see how volunteering in the community is wrong”, states Awadallah. He admits, however, that there might be certain types of work Arab citizens might see as linked to flashpoints of the Israeli-Palestinian conflict and would be against contributing to in any way.

The question of whether Arab citizens of Israel should volunteer for national civilian service has always been a source of debate amongst Arab Israelis. Recently, the Israeli government began reconsidering the terms of its universal conscription law, and the question has come up again.

As the government continues to draft policy on this sensitive issue, the Higher Arab Monitoring Committee, which represents Arab political leaders in Israel, has reiterated its opposition to Arab participation in national civilian service because of its connection to military service.

However, some community leaders are changing their perspective on the issue. Earlier this month, the Council of Arab Mayors, which represents most of Israel’s Arab towns and villages, said that the establishment of new guidelines, according to which young Arab citizens might volunteer through local governments, could pave the way for Arabs to volunteer for civilian service.

In addition, a recent study by the University of Haifa on attitudes towards civilian service among Arabs in Israel noted that the number of young Arabs volunteering in civilian service programmes has in fact more than doubled in the last three years.

While it is encouraging that 2,399 Arabs are taking part in civilian service today, the question of what is needed to help transform the community’s negative views of the programme remains.

As part of the programme, volunteers gain valuable experience working in local schools, helping the elderly and serving in community clinics. In exchange, they receive a monthly stipend, travel subsidies and upon completion a monetary scholarship towards higher education or purchasing a house.

Dr As’ad Ghanem, a senior lecturer at the School of Political Sciences at the University of Haifa, says the way to find acceptance for civilian service among Arabs is to emphasise the importance of civic participation and to give Arab leaders more control in administering the part of the project pertaining directly to Arab volunteers.

Ghanem spoke recently on a popular radio show about the programme, which he made sure to refer to as civilian or community service – as opposed to national service, the term used by Jewish Israelis. He also stated that the process for running the programme has to be overhauled.

His point was echoed by Nazareth mayor Ramez Jerayssi, who said recently that the mayors of Arab towns would be willing to expand the existing volunteer programmes in the Arab community as long as there is full cooperation with local governments and projects have no link to the military.

Ghanem agrees. By placing significant responsibility for voluntary service for Arab citizens in the hands of the local authorities there is a much higher chance that it would benefit the community directly, he says.

The discussion over national civilian service provides an interesting insight into the relationship between Arab citizens of Israel and the state. In a state that does not always welcome their presence it is not surprising that some Arab citizens are wary of joining a service that is framed as an act of national allegiance. The solution may lie in distinguishing between acts of national loyalty and civic participation.

Restructuring the programme as one focused on civic participation could promote a sense of shared civic responsibility for all of Israel’s citizens and, in turn, improve relations between the Jewish and Arab communities.

Ruth Eglash is Deputy Managing Editor and Social Media Editor at The Jerusalem Post. An award-winning journalist, she has been reporting on social and human interest issues in Israel for more than seven years. This article was originally written for the Common Ground News Service (CGNews).