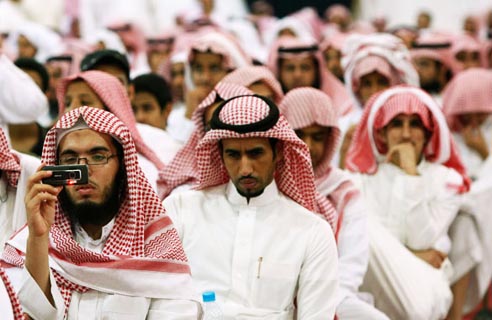 Some Saudi men (and their mother’s) may want you to believe that the Saudi man is helpless.

It is expected culturally that the woman, whether it be mother or wife, will take care of the inside of the home.  She may or may not have a housemaid but she will be the one responsible for ensuring that the house is clean, clothes are washed and food is cooked.

A Saudi man may want every woman to think that when he comes in the door all that is expected of him is to toss his smaugh off of his food, take off his shoes, put his feet up and watch TV until dinner is served. However I can assure you that if a Saudi man has ever been abroad outside of Saudi Arabia where he has lived alone, even as a student, then he has learned hidden talents

A Saudi man may not readily acknowledge it but he actually has observed and learned much more of his mother’s ways than he may even realize himself.  Many a young Saudi boy while growing up, and even as he enters teens and then twenties, will observe his mother as she cooks in the kitchen.  He may have even helped her.  My late husband shared how he would always help his mother roll out and fill the sambosa dough as he was growing up, for example.

Additionally Saudi boys while growing up will likely accompany their father’s, uncles and friends to the desert on weekends.  During these weekend jaunts, the fathers and uncles are usually the cooks.  They will typical prepare kubsa or maybe a roast lamb outside over a fire.  The young boys will assist and watch the food cook over the fire.

These events helped prepare the Saudi man for those times when he may find himself alone whether out of the Kingdom or on his own for a period of time.  If he is away from family, he’s not going to go out every night to eat.  Well, let’s say most guys will not.  They will begin experimenting with those dishes that they remembered watching or helping others cook when they were young.  Their confidence will grow with the success of their dishes.

Now my late husband found that he actually enjoyed taking a turn at cooking in the kitchen.  He liked experimenting with differing dishes and using different spices.  One time he even made us “hot dog kubsa.”  (And yes, it was pretty tasty too!)

There is no doubt in my mind that every Saudi male knows how to make kubsa.  After all, it is pretty much a signature dish in Saudi Arabia!  Most Saudi guys know how to make seleek as well.

Bottom line, a Saudi guy is not going to let himself starve.  He may not like to do dishes but a Saudi guy can generally be persuaded to cook from time to time!