The Power, and the History, of the Thaler 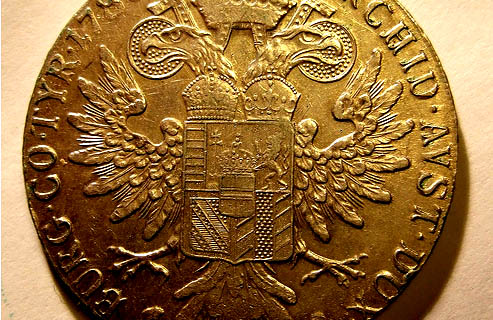 I collect coins – ancient mostly, but some from more recent times. So the other day I happened upon a review by Arab News journalist Roger Harrison of a book about the history of the Maria Theresa thaler. The review hit a couple of buttons for me – the history and culture of the Middle East, and of course the history of coins.

Roger’s review of Thaler Tales (a Silver Legend) by Clara Semple is as good a taster as an author could hope for. He expertly summarizes how the thaler became the common currency of the Middle East because of the reliability of its silver content and its intricate design. How the low-cut dress of the 18th Century Austrian Empress was more to the taste of Levantine merchants, and won out in popularity over the more severe profile of the monarch in widowhood. Also the origin of the word thaler, which subsequently morphed into the dollar, and of the Spanish reale, its big competitor, which eventually gave its name to the riyal, the currency of Saudi Arabia and several other states of the Arabian Peninsula. There can’t be many Saudis or Americans who have any idea about the origin of a word they use a hundred times a day.

The book was published in 2006, so this is not exactly a hot-off-the-press post. But hey, the thaler’s been around for 250 years, so no matter. I’m not sure what has happened to the publisher, Barzan Publishing – the website doesn’t seem to have been updated since 2007. But I hope they’re still in business, because they’ve produced some interesting stuff in a very precise Middle Eastern niche. I referred to another Barzan book about a Victorian adventurer who risked his life in the 19th century visiting Macca and Madinah in an earlier post about the Haj. It’s a gem.

Coins are little pieces of history you can hold in your hand. Anyone living in the Middle East who would like their kids to taste history in an object can easily find a thaler in most of the souks of the region. As for me, if anyone wants to get me a book for Christmas, Thaler Tales would be it.