The Parallel Ends of Mubarak and Don Giovanni 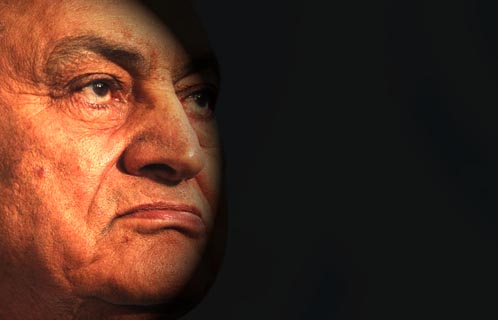 Eighteen days and no longer counting. On this day of farewell, although the wellness wished was not very strong for Hosni Mubarak among the thousands upon thousands of protesters gathered today in Tahrir Square, the Pharaoh left Thebes for good. There have been so many questions swirling in central Cairo and streaming into households worldwide that none of the thousands of pundit-pandered answers were able to satisfy.

Never has a revolution been witnessed by so many people; never have so many questions been asked with so little ability to predict precisely what would happen. Will he leave? Or perhaps, more likely, when will he leave? Or, perhaps, has he already exited, stage right? Now we know, Mubarak has resigned.

Yesterday there was a brief spell of hope that Mubarak had finally accepted his fate. I attended an Egyptian event in Manhattan about as far away from the protests in Tahrir Square as can be imagined. This was a performance of Mozart arias translated into Arabic, some into Egyptian dialect. A friend arrived full of relief, having heard the earlier news that Mubarak was planning to leave. The old man’s long and self-serving speech seemed to squelch any hopes for that; the sighs and groans of the unified Egyptian spirit of protest could then be heard around the world.

During intermission a long-time Egypt watcher told me that Mubarak will not leave and violence was sure to start up again. Thankfully, he was wrong.

Mubarak on cable. Mozart in Arabic. Yes, Mozart. What could they possibly have in common? There is still a performance tomorrow afternoon at Lincoln Center and anyone living in the New York area should think about going and decide for himself or herself. No, it is not needed to bring down Ozymandias, but there was something majestic about watching superb Egyptian opera singers bringing Mozart’s humor and pathos to the stage at this moment.

This moment in Egypt (and not just Egypt) is about change, a desire to bury the autocracy which has created a corruption-crazed super-rich but left the ever struggling middle class begging for bread and hardly getting even a few stale crumbs. Mubarak and his elite have their dollar-fueled billions and gold bullions, their kitch mansions and bullet-proof Mercedes and all the trappings of royalty. But they long ago lost the humanity of a Figaro or a Papageno.

As I sat last evening in Lincoln Center listening to the strong and polished voices of the singers, so proud to be producing some of the greatest vocal compositions ever written in their native language, I was mesmerized. To start the concert, the baritone Ashraf Sewailam sang the aria “O Isis und Osiris” in which the young pair of deities is called upon to bless two young lovers in Die Zauberflöte (The Magic Flute):

Grant them your aid in their endeavor.
Lead them to find the path of right.

The voice raised in the auditorium was at that moment one with those in Tahrir, several thousand miles away.

The program last night had selections from four of Mozart’s operas, but the one that most resonates in my mind today is Don Giovanni, the legendary lover Don Juan in Italian libretto elegance combined with Mozart’s unique Viennese harmony. In the 1787 conceived plot, the ending is prophetic for the events unfolding daily in Cairo in 2011.

In the opera Don Giovanni is an arrogant and abusive nobleman, who must have his own way with everyone. His passion was for the ladies and he was young, but in other ways he is a stark iconic shadow of Mubarak. In the end Don Giovanni meets his stone-cold fate for his cruelty. A statue of Ozymandias proportions comes to the party and drags Don Giovanni down into hell as a chorus of demons seals his fate. The closing words of the opera are indeed prophetic:

Such is the end of the evildoer: the death of a sinner always reflects his life.

Check out a performance (not the one I saw) of this aria and then go back to Al Jazeera’s live coverage.

It is too early even for a Youtube version of yesterday’s operatic performance, but there is a Youtube video about an earlier performance with Ashraf Sewailam and Raouf Zaidan in 2010. Also there is an excerpt here.

One Response to The Parallel Ends of Mubarak and Don Giovanni