The First Harley of Summer? Expats Back in Damascus 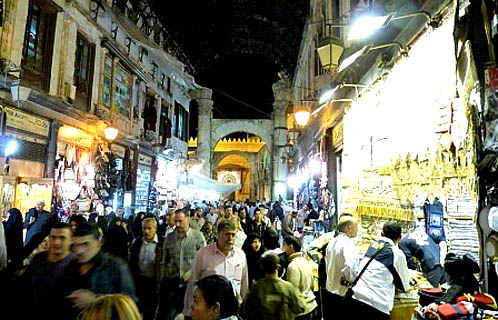 If the east coast drawl wasn’t conspicuous enough then the high fiving certainly was. The two young guys were unquestionably Syrian but everything about them screamed of ajnabi, foreigner. The accent, the Harley Davidson t-shirts with the bald eagle and American flag draped incongruously across the chest, the fact that they had just reached into the shop fridge to pick out a couple of Coronas; these chaps were foreign Syrians.

But it turns out that they’re not that unusual here in Damascus at this time of year, especially in the more upper class districts of the city. Summer holidays bring a temporary reverse migration, as Syrian expats from across Europe and North America come back to the home country to visit family, catch up with old friends and enjoy the gentle Damascene evenings.

This influx of wealthy, westernised Syrians noticeably alters the population make-up of the capital, or at least areas like Sha’alan and Abu Roumaneh. Girls in trendy labels strut up and down the shopping avenues and guys lean casually against shiny cars, their floppy surfer hair contrasting starkly with the usual hyper-greased hairdos of most Syrian shabaab. Even large framed Shoreditch glasses are suddenly spotted, now not merely worn because the local opticians hasn’t updates its stock since the ‘80s. It might just be the heady summer weather but conservative dress standards also seem to have been relaxed slightly.

One might expect the current uprising to have deterred many of these expats from returning. But according to various landlords and estate agents I’ve spoken to, Damascus letting rates have reached their usual summer peak in reaction to the annual population swell. All of this is further proof that life in the capital goes on as usual; despite the ongoing protests, arrests and brutal government crackdown in the rest of the country.