Arabic: Why it’s Failing, What Can be Done 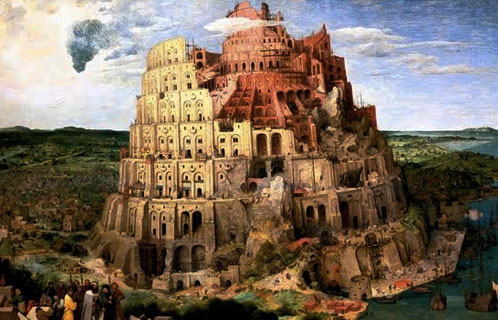 The Tower of Babel by Pieter Brueghel

I am sitting in a busy airport terminal in Doha. All around me, people are having urgent conversations on their mobile phones. An airport is the modern equivalent of the Tower of Babel. Many languages are being spoken, but the default is English, not Arabic. A Lebanese businessman is talking to a colleague, another Arabic speaker. I can understand most of what he is saying, because in one sentence he uses phrases from three languages – Arabic, French and English. Nearby, a Gulf Arab is also on the phone. Like the Lebanese guy, she switches language mid-sentence, but confines herself to Arabic and English.

After five decades of oil-fuelled development, English is firmly established as the second language of the GCC countries. For many Arabs this is a good thing – English is their gateway to other worlds, just as French was for the people of the Levant a century ago. Yet there is also widespread concern that English is colonising the language that gives Arabs their common identity. Words and phrases of alien origin are creeping into Arabic, and creating a common parlance far from the pristine language of the Quran.

Even in Saudi Arabia, that most conservative of nations, it’s fashionable for many youngsters to speak in English, as this article in the Arab News reports. And for all the wealth and power of the Arabic-speaking nations, very few words in the modern era have crossed the other way into common English usage. Those that have made the jump bring with them connotations seen by native English speakers as negative – fatwa, jihad and intifada. A far cry from the language of invention and discovery that entered the European languages in earlier times – algebra, algorithm and safari, to name but a few.

Since humans first grunted to each other in caves, languages have developed, mutated and split off into separate dialects. Even families have special words not understood outside their own small confines. Slang comes and goes – some gets absorbed into the mainstream. And every year a few minority tongues die out.

What troubles Arab intellectuals more than the bastardisation of their language is that its use is declining, especially among the young. There is an Arabic interface for Facebook, yet 75% of Arabic-speaking Facebook users prefer the English interface. Go back to Doha airport and visit a bookshop. Only a small minority of titles are in the native language of Qatar.

For many expatriates living and working in the Middle East, Arabic is an impenetrable barrier that inhibits our understanding of the nuances of the local culture. We expect Arabs to understand our culture, and often think of them as “Westernised” if they have fluent English. Yet we fail to make the effort in their direction. Because we don’t have to. I include myself in that category. I probably understand more Arabic than many, yet recently a close friend from Saudi Arabia said to me “Steve, you have been coming to the Middle East for thirty years. It’s an absolute disgrace that you have not learned more than basic Arabic.”

He’s right. It is a disgrace. When I first arrived in Jeddah a long time ago, I took Arabic lessons. I didn’t keep them up. More recently, I bought a CD-based Arabic course. It’s largely unvisited. There are always more important things to do. I find reading the script particularly difficult, yet I haven’t forgotten how to read ancient Greek. But I will persevere.

Making the effort to speak Arabic is one way of crossing the cultural divide, and it’s a shame that more people don’t do it. In fact, I would argue that the GCC countries would do themselves a favour if they introduced a requirement that expatriates in some job categories are required to pass a written and spoken Arabic test as a condition of being allowed to work in the country for more than two years. Such a measure would boost the teaching of Arabic, create jobs for nationals and increase mutual respect among local and expatriate populations.

But the bigger issue is that the health of a society and culture is reflected in the health of the language. If I was a GCC national, I would be encouraging my government to make greater efforts to promote Arabic literature – not just scholarly tomes, but works that touch and inspire ordinary people. I would be subsidising the film industry, incentivising bookshops to sell more Arabic titles, setting up more literature prizes.

Yes, I know that many of these activities are already taking place, and that there are already some great writers, artists, cartoonists and dramatists in the Middle East. But not enough. It’s time that an Arabic film won best foreign film in the Oscars. It’s time that another Arabic writer stepped into the shoes of Naguib Mahfouz and won the Nobel Prize for Literature. Because these prizes bring global respect for Arab artists. Recognition for a great work of art will bring far more respect for the Arab world than the world’s tallest building or the 2022 World Cup.

And a little more self-respect and esteem by others will go a long way in this region.

One Response to Arabic: Why it’s Failing, What Can be Done