The number ’9? car plate could be worth much more than the 10m paid for it 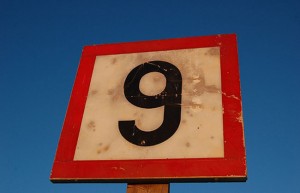 So what would you do were 10 million dirhams to appear mysteriously in your bank account?  Bag a ‘bargain basement’ luxury villa in Dubai now that property ‘experts’ tell us we’re at the bottom of the market?  Have a punt on the stock market or perhaps take a trip to the gold souq in anticipation of the financial Armageddon the world is facing according to other, ahem, ‘experts’.

There is, however, an alternative to these prosaic investment options.  Imagine the look on your family’s face were you to gather them in the living room and say: ‘I believe I’ve made the best choice for all of our futures and here it is.  Yes, your eyes do not deceive you, young Darren.  It is indeed a car number plate.’

10 million dirhams is what Ahmad Ahli paid last Saturday at auction in Abu Dhabi for the number 9 plate.  The plate itself came in a nice leather brief case. Very nice leather, I’m sure.  The interesting point, however, is that Mr Ahmad will not be attaching the expensive piece of tin to a finely engineered, performance car for which he will have paid a fraction of the cost of that gleaming number ‘9. No, he’s in the investment business.

There is, apparently, a  lively secondary market in the low number plate business and Mr Ahmad hopes to turn a tidy profit from his investment.  Given that he made a 3 million dirham profit on a recent purchase you’d have to be optimistic for him.

But what of the 10 million he paid at auction? Well that’s going to a very worthy cause, namely the establishment of the Middle East’s first rehabilitation centre for victims of car accidents.  Ever since I read the story I’ve had a nagging feeling, however.  I’ve no objection to people doing what they will with their cash and if that money goes to helping victims of the appalling accidents that happen daily on our roads so much the better.  But couldn’t we put a fraction of that money – say around 300,000 dirhams – towards a campaign to educate and help prevent accidents.

That’s how much the ‘Embrace Life’ video cost to make.  It was originally intended to be viewed by a limited number of people living in Sussex in the UK but once released onto the internet the brief, poignant film has become a global sensation.  It has been viewed by more than 11 million times on YouTube since January of this year.  Have a look:

It’s impossible to tell how many lives have been saved as a result of 11.5 million watching this. There must, though, be a good chance that there is at least one family in a similar position to that featured in the film as a result of viewing it.

We could make thirty such films for 10 million dirhams but I think we’d all settle for one similarly startling creative idea executed so professionally. What about a 300,000 dirham budget and a prize of 50,000 dirhams for the best idea. Well,  Emirates Auction, what do you think?