Gender Apartheid: Is a ministry for women needed? 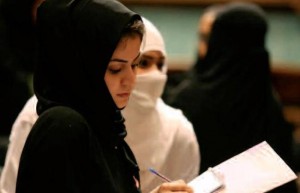 Last week news came out that the government is seriously considering a women’s affairs ministry. The idea for a ministry originated from an official proposal sent to the government from a group of influential businesspeople in Jeddah. The main point of the ministry is to ensure that women related laws and regulations are followed through and implemented in the other government ministries. I respect the people behind this proposal and I know that they have good heads on their shoulders. However two issues come into play. First of all the ministry proposal is actually one of many in the study that they had presented to the government.

“The study, entitled “Businesswomen in the Kingdom of Saudi Arabia”, also called for “the appointment of women as members in the Saudi Shura [consultative] Council…In addition to this, there is also a recommendation to “remove restrictions imposed on women, whereby it is necessary to appoint men as directors of projects that serve both sexes”. There is also a demand to “ease restrictions on women commuting on public transport, as well as women’s driving, and international travel”.

I’m speculating here but there’s a good chance that some decision maker looked over this list and thought to himself out of these which is the easiest to do to placate these influential unhappy Jeddah rich. Another gender-segregated building for women that will only add ignorable paperwork to our bureaucracy mountain, that’s doable. Hey it can even work both ways and make the muttawas happy.

The second issue is a nagging feeling that this ministry will only add to our misery. Currently, if I go to any ministry, even the ministry of justice I am treated differently and in most turned away at the door because I am a woman. I have to go to a little side-building for women only where a receptionist or clerk is only allowed to process the most routine paperwork. I would not be surprised if this women affairs ministry turned to a women only island where these receptionists and clerks would be moved to as ambassadors of the other ministries.

A ministry for women’s affairs might work in other countries where women are viewed as less advantaged but still fully human and can walk about freely. Here in Saudi, that is not the case. Women are “the other”, something to be taken care of and guided lest it go wayward. A ministry that takes care of only women is just a little too agreeable to the ongoing gender apartheid for my taste.