Dedicated – and Faithful – Followers of Fashion 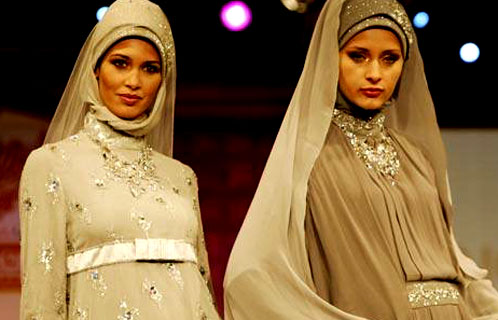 The fashion industry is currently showcasing its wares for next year’s spring/summer collections. New York and London have already strutted their stuff and with Milan winding up and Paris on later this week, you might be forgiven for thinking Europe and North America have the global fashion business stitched up. (Pun intended.) Not so.

Big fashion brands may be wondering how to stem a decline in business – Dolce & Gabbana for instance announced the closure of their diffusion line last week. But there is one growth segment just waiting to be brought into the mainstream of the industry: global Muslim fashion.

Muslim fashion? I hear you ask in surprise. Isn’t that all just long black cloaks and dour headscarves? Far from it: Bloomberg has estimated that the global Muslim fashion market could be worth $96bn. For scale, compare that to the entire UK fashion industry, which is valued at £21bn. What makes it even more attractive is that those driving the development of Muslim fashion stem from a young demographic. Of the world’s 1.8bn Muslims, nearly half (43 per cent) are under the age of 25 – meaning they make up more than 11 per cent of the entire world population.

Milan Fashion Week has got wise to this. Next year they have invited Malaysia’s Islamic Fashion Festival to showcase its designers. Started six years ago under the patronage of Malaysia’s First Lady, the IFF has already visited Abu Dhabi, Astana, Dubai, Jakarta, Monte Carlo, New York, Singapore, Bandung and London. And Malaysia is not the only place that the Muslim fashion industry is fast developing.

Indonesia has an Islamic Fashion consortium whose chairwoman hopes to establish Indonesia as a global centre for Islamic fashion. And Dubai’s Fashion Week, to be held next month, aims to combine tradition with modernity. Muslim women are looking for echoes of their culture and religion in their fashion. In Dubai, this means including the traditional ‘abaya’ of the region into the upcoming Fashion Week. The abaya is the long black cloak beloved of women of the Gulf region, which has become popular with Muslim women around the world.

Far from reviling the abaya, Muslim women are showing pride and love for this traditional fashion form, and increasingly re-inventing it, and aspiring for it in the Western world. One woman writes here about how it brings her a sense of elegance and grace. And last year Harrods stocked a line by a Qatari designer, whose creations had Muslim women flocking to purchase items costing as much as $20,000.

The abaya has also attracted haute couture interest from designers like Galliano and Ferreti, who showcased their designs at Saks in New York at the request of some Saudi Arabian customers who commission evening dresses from them.

Primarily however, this is a grassroots development by young Muslim women wanting to combine their love of fashion with a desire to uphold the tenets of their faith in Islam. And this is where the opportunity lies to open up an underserved segment and meet a genuine untapped need. This summer the Washington Post asked why mainstream fashion retailers weren’t serving the 250,000 Muslim women in the Washington area. In these troubled economic times, this is an audience that is optimistic and affluent but surprisingly ignored.

These fashion forward women have found the high street wanting around the world. They have been driven to designing their own lines, showcasing ideas on how to wear the hijab, setting up blogs to discuss how to ‘hijabise’ what you can find in the retail stores, as well as creating videos on how to wear your headscarf in a fashionable style. There are even magazines springing up to cater for this trend.

The internet has proved to be a boon to these consumers – who are tech savvy. According to a report by London College of Fashion, modest dressing is a growing phenomenon, and not one limited to Muslim women. As entrepreneurs, they are turning to online retail as a way to reach out and market products. As consumers, the internet gives them wider geographic reach to producers of goods that embody the modest values they are after, modest values which are shared by a global body of fashion-conscious Muslim women.

The broad religious prescription for Muslim women is that clothing should conform to modest parameters – long sleeves, long lengths, comparatively loose, usually topped with a form of headcovering. But with this prescription taken care of, these faithful fashionistas – sometimes called ‘hijabistas’ as a derivative of the word ‘hijab’ which is used informally to refer to the headcovering – are as much in thrall to trends as their non-Muslim counterparts.

Other religious audiences may interpret modesty in different ways but the definition allows for plenty of crossover – and plenty of room for brands to speak about modesty in their fashion lines whilst respecting the differences with which different faith groups approach the subject. In fact, modesty even unrelated to faith is proving appealing to women in general, as this news incident last year about celebrity chef Nigella Lawson proved. Her full body covering at an Australian beach prompted female commentators to wonder if they too might be brave enough to cover up.

Muslim fashion is a pan global affair, not limited to one country or region.

Whilst cultural and regional diversity remains – for example in the way that the headscarf is worn, or the colours and prints that are used – these are underpinned by shared values espoused from Americans in Brooklyn to British women with Japanese heritage.

The bottom line is that designers, labels, marketers and fashion houses looking to serve this market will be able to develop hijab friendly lines which appeal to a global audience. The values underpinning global Muslim fashion are exactly that – global. The audience is connected through the internet and shares styles and ideas. This means that the basic ideas, communications and brand values are consistent wherever these hijabistas are to be found. And since they exhibit a sense of collectivity, brands can quickly develop loyalty amongst them, if they show that they understand that these women want to be on the cutting edge of fashion, as well as entirely dedicated to their faith.

To paraphrase the famous song, there is no need to seek her here, or seek her there. She is ready and waiting to be served: the dedicated – and faithful – follower of fashion.

This article was originally published on FT.com