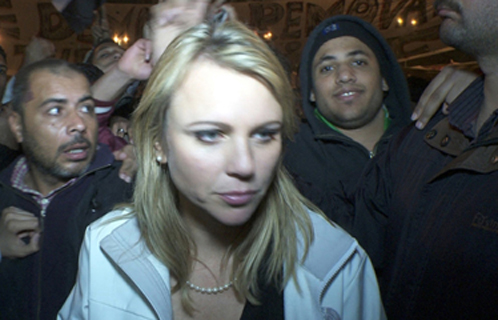 The news of Lara Logan’s brutal sexual and physical assault on February 11,2011 while covering our victory in Cairo has overshadowed the news of the revolution since yesterday.

First of all, I am extremely angry for what happened to Mrs.Logan , I am very sorry. I apologize to her and to her family.

We did not want this happen whether to her or any lady in our country in any time.

Second of all we do not know who was really behind the attack , whether they are NDP thugs or from those criminals that escaped jail or from some first time losers who had not participated in the revolution, yet decided to celebrate it as if it were the African cup of nations.

I will not even call them the anti-Mubarak protesters or the Tahrir protesters as some have started to do because this will be just another insult to those who endured too much in the past 3 weeks.

We do not have enough details except the statement of CBS News itself that was very brief.

Thirdly, I do not know why she had to leave immediately without going to an Egyptian hospital to get an immediate certified report and later continue her treatment in the States. Of course if I were in her place , I would not have stayed a single moment in this country. But I know how the mainstream will fire back and this is why I am speaking about a report. Our MSM has not spoken or admitted that they were partially responsible for the attacks  up till now by the way.

Fourthly, what happened to Logan does not give any person the right to stain this revolution or use it to attack the Egyptian people .

I know the American media will find something to speak about before the OSCARs now and I know the racists of the right will jump on the bandwagon. That has started already, we have been called “the country of savages” and others have claimed “this would not happen in time of Mubarak”. Ironically, Egyptian journalists and activists were sexually harassed publicly on the famous staircase of the syndication of journalists in 2005 by the orders of the Mubarak regime.

What happened to Logan does not give any right to any racist to attack us. Oddly enough I find on those same right wing websites people blaming the victim Logan herself too. We have their twin brothers too in Egypt!

Lara Logan already met troubles in her coverage thanks to the former regime and being a victim of a brutal attack like that in particular makes me wonder if it was deliberate attack.

3 Responses to Regarding Lara Logan: Don’t Let it Stain Tahrir