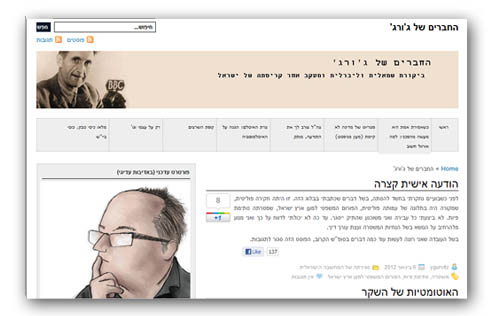 Last summer, at the prompting of several human rights activists, among them Motty Fogel, whose brother was murdered in a terror attack in Itamar, Yossi Gurvitz, author of the Friends of George blog, began to reconsider some of the moral issues regarding legitimate resistance to Occupation. Though I have had no direct contact with either Gurvitz or Fogel, I imagine that at least some of the reconsideration sprang from the particularly gruesome death suffered by Fogel’s brother’s family, including the murder of an infant.

Gurvitz wrote a blog post, On Violence, which stated that while at one time he didn’t consider any settlers to be civilians, and hence all should be considered potential targets of legitimate resistance, today he believed that only those armed should be considered so. Among those who Gurvitz believed legitimate targets were the settler “security” thugs armed with AK-47s, attack dogs and all manner of weaponry, whose job was not to protect settlers, but rather to terrify, maim and kill Palestinian farmers and shepherds and their non violent activist supporters. Here I’ve recounted some of their more heroic exploits defending the inalienable rights of the Jewish people to “enjoy” the fruits of others (I.e. steal Palestinian land).

To any reasonable person, Gurvitz’s post would appear to be a sensitive moral reappraisal in order to further distinguish between civilian and military targets. The end result was for Gurvitz, a leading blogger of the Israeli anti-Occupation movement, to reduce the number of those he considered so morally culpable for the Occupation that they might be targets for resistance and attack. Further, the blogger made clear that he personally opposed violence of any sort and would not engage in it himself.

But the Israeli security apparatus and it’s loyal helpers in the far right lawfare community didn’t see it that way. They saw Gurvitz’s post as an opportunity to teach a particularly brave and outspoken blogger a lesson in the ways of the new far right Hate-State that Israel has become.

The Legal Forum for the Land of Israel, a lawfare-type pro-settler advocacy outfit, filed a formal complaint with the Israeli police accusing Gurvitz of incitement. They claimed that he was advocating killing IDF soldiers and settlers. The police, a sorry lot on the best of days, took up the cause along with the State Inquisitor, Shai Nitzan, who is an expert at figuring out ways to turn legitimate political activity into seditious criminality.

Two weeks ago, the police “invited” Gurvitz for questioning. He was handled politely, the interrogation was judicious. You see, because Gurvitz is an Ashkenazi male journalist, he was accorded far better treatment than was accorded Dirar Abusisi or Ameer Makhoul.

Yossi was forced to sign a document denying him the right to discuss the questioning or what is being investigated. But I have signed no such document and can speak freely to denounce this travesty of justice and democracy.

The Forum affirms its support of free speech in a statement made to Haaretz. However free speech doesn’t entitle anyone to actually challenge the worst depredations of the Occupation State. These leftists have to understand that there’s a new Zionist sheriff in town. And Sheriff Bibi ain’t gonna take no guff from no one. If they don’t like it they can get outa Dodge.

Seriously, there’s a new environment in this version of what we might call Israel 2.0, which so many of us have come to detest. It’s characterized by fear, intimidation, hatred and violence directed at anyone who stands in the way of the ultra-nationalist steamroller. It’s time for those of us who object to do what we can to place our bodies, like the Tienamen Square lone man standing before a tank, in the path of the machine.

This article is published with the kind permission of Tikan Olam.