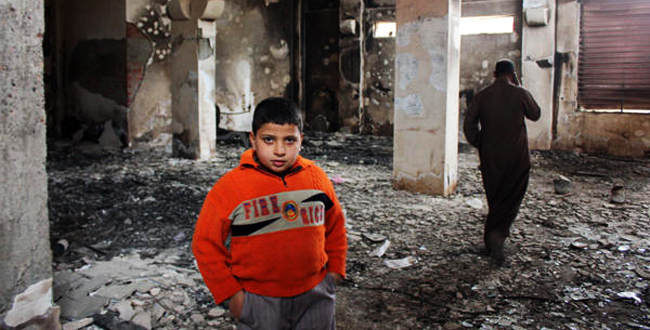 With a renewed wave of sectarian clashes and heightened tension between Egypt and the US over the “NGO hostage crisis”, the new Egypt doesn’t seem so new after all.

The Muslim-Christian violence in Amreya, just outside Alexandria, triggered by the all too familiar inter-religious love affairs, or rumors to that effect, saw a deplorable precedent in dealing with such issues.

Following customary law reconciliation sessions led by the constituency’s MPs, affiliated with the Salafi Al-Nour Party, and the village elders, it was decided that eight “culprit” Coptic families would leave their homes in the village of Sharbat. A committee was also set up to sell their property, in a decision that was officially rejected by the Melli Council of the Orthodox Church in Alexandria and several rights groups.

Hundreds of the village’s Muslim residents had attacked on Jan. 27 the home and shops of a Coptic tailor, Murad Girgis, and property belonging to his family, after the circulation of video footage showing an illicit relationship between him and a Muslim woman.

Fearing for his life, Girgis handed himself over to the police but the homes and shops of relatives were still later set on fire.

Reactions to the strange turn of events by political players have either been muted or utterly unacceptable. Even though the developments were criticized by PA Speaker Saad El Katatny, who had stepped down from his leading position in the Muslim Brotherhood group’s political arm the Freedom and Justice Party (FJP) to accept his role as house speaker in the FJP-dominated lower house of parliament, the FJP’s official reaction was vague at best.

An article published on the party’s website on Feb. 15 said that Hossam Al-Wakil, FJP media spokesman in Alexandria, claimed that Copts in the Alexandria village lived among Muslims “without any problems whatsoever.”

To add insult to injury, he said that “the crisis that broke out between Muslims and Christians … ended with a decision by the village’s residents to remove the people of both Christian and Muslim families involved only, in order to prevent further bloodshed and sectarian [clashes]”, clearly trumpeting the “solution” as a breakthrough in handling messy sectarian squabbles.

An informal delegation of 16 MPs and community leaders met Thursday for an eight-hour session in an area near the village, after which Coptic MP Ihab Ramzy declared in a joint statement the delegation’s condemnation of the lack of rule of law and announced that the families will return to their homes as soon as the rebuilding in complete. He added that separate criminal investigation is already underway. A Coptic clergyman who attended the session also condemned the media’s use of the term “displacement” to describe the “temporary removal” of the families, stressing that the political outbidding by some parties and interest groups was unacceptable and betrayed a lack of understanding of the social nature and customs of tribes in his village.

The compound layers of reservations I have about how this issue has been mishandled cannot be overstated.

First, the delayed response by the security officials. In fact, it is abundantly clear that there was hardly any security presence in the village when people’s homes and shops were deliberately burnt to the ground. And if there was enough police, how could they have failed so miserably to stop the arson?

Second, the very notion that by removing the “guilty parties” whether Muslim, Christian or both, from the village, is sufficient to resolve the issue is fundamentally wrong. While it may be seen as a temporary panacea, it is in fact more likely to backfire both inside the village in question and nation-wide, leading to a copycat incidents that can even be contrived to create a veneer of legitimacy for a minority of vocal extremists wishing to “purge” their villages from Coptic residents whose ancestors have lived on the land for centuries. In short: this is a very dangerous precedent even though it is being framed as a temporary measure.

Third, the farcical idea that the police is undertaking a serious criminal investigation enjoys zero credibility. If such investigations had ever been serious, then why is it that to this day there has been no disclosure of who was behind the Al-Qeddisin Church bombing on New Year’s eve last year, or Atfih, Imbaba and Maspero, to name a few examples from 2011 alone? Paying lip service to calls for implementing the rule of law in a transparent process where culprits on both sides are punished for criminal behavior without any pressure by either side to skew the results of the investigation, is not enough. The state, specifically the interior ministry, must create a mechanism through which to report to the public the developments in probes of such high-profile and politically-sensitive issues.

Fourth, the FJP’s perpetuation of our culture of “burying our heads in the sand” is a far cry from the party’s thunderous statements about achieving justice. When their official spokesman claims that there are no problems in the blighted village and welcomes a disastrous move to displace families on both sides as a viable solution, then what exactly have they achieved to prove that they are at the forefront of a new Egypt?

Half-baked measures that do more harm than good, the false, self-congratulating attitude of the holier-than-thous, which leaves a bitter taste in the mouth of the victims and anyone who believes in unwavering justice, are not what we expected in the wake of this “glorious revolution”.