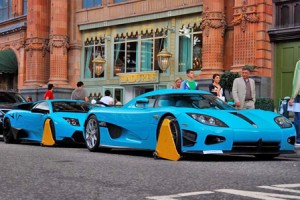 Last week, the UK newspaper the Daily Mail reported that two Emiratis were charged with driving recklessly without insurance after their Lamborghini spun out of control and crashed in London.

The impact of the crash was so forceful that a parked BMW flipped over. Seemingly indifferent to the situation, the two men allegedly told a passerby: “It’s all right, we’ll pay for the damage.”

Contempt for the law, which is a common noveaux-riche trait across the Gulf, has been highlighted in a series of unflattering reports in the British media of late. Though the vast majority of Emirati and Gulf tourists to the UK and elsewhere are law-abiding visitors, a small number of delinquents have sadly found themselves on the wrong side of the law.

For example, a photograph was heavily circulated in the Gulf last month of a blue Koenigsegg and Lamborghini parked outside of Harrods. The reason for the image’s popularity? The cars, which are registered to Qatar’s royal family (who now own Harrods), were ticketed and clamped by a London traffic warden.

Another article in the Evening Standard highlighted the complaints of a ticketing officer in London who found it difficult to issue fines to offenders from the Gulf driving cars with foreign licence plates. Bugatti Veyrons, Porsches and Rolls-Royce Phantoms were some of the vehicles named. In response to the noise these cars generate, residents have also launched campaigns to restore the peace and quiet that has been lost on the quieter streets of London.

Reading all this news made me remember a quote by the late Sheikh Zayed, in which he said: “The biggest advice I can give Emiratis is to stay away from arrogance.” Driving vehicles dangerously and without insurance as well as a total disregard for the law are symptoms of the arrogance and overconfidence that Sheikh Zayed warned us about.

Even before travelling, the UAE’s Ministry of Foreign Affairs website reminds Emiratis to fully comply with the laws and regulations of their host state.

Mofa’s advice is to be heeded. Its recently launched Tawajudi project, meaning “my presence”, is an online portal on which citizens are invited to register the destinations where they will be traveling. This allows the Ministry to help its citizens “in cases of crisis and emergencies to provide them with guidance and advice regarding what they must do”.

Tawajudi was immediately put to use during the recent forest fires in Moscow. Mofa contacted its registered Emirati citizens visiting Russia (at last count, over 28,000 in total have registered) and advised them to leave as soon possible due to the toxic smog. The UAE embassy in Russia also offered logistical assistance to nationals wanting to depart the capital.

The least that Emirati citizens can do to reciprocate Mofa’s numerous services is to make sure we represent our country, culture and religion in the best possible manner.

After tweeting the Daily Mail story, an Emirati suggested that such reckless individuals should pay the country for damaging its reputation; several others suggested that there was a link between those misbehaving at home and abroad.

Whatever the case, travelling abroad on an Emirati passport is a privilege that must not be taken for granted. The passport that these individuals carry when they travel effectively makes them ambassadors for the country, for better or worse.

Since we expect tourists to be on their best behaviour when they visit the UAE, it is only fair that we feel equally outraged when our own misbehave elsewhere. The tiny minority of Emiratis who act irresponsibly abroad must not be allowed to tarnish the image of this country or their fellow compatriots.

Perhaps it should be made clear to the minority of Emirati and Gulf citizens who misbehave while traveling that acting inappropriately can cause them to lose their travel privileges. The Ministry of Foreign Affairs could opt to send letters of warning to Emiratis who disrespect the law abroad.

Committing crimes is a serious offence that we must take exception to regardless of where it was committed.

The features editor of a London-based Arab newspaper recently told the Evening Standard that Gulf citizens prefer traveling to the UK because unlike “France or the US, they are made to feel welcome here”. This welcome must neither be trampled upon nor taken for granted.